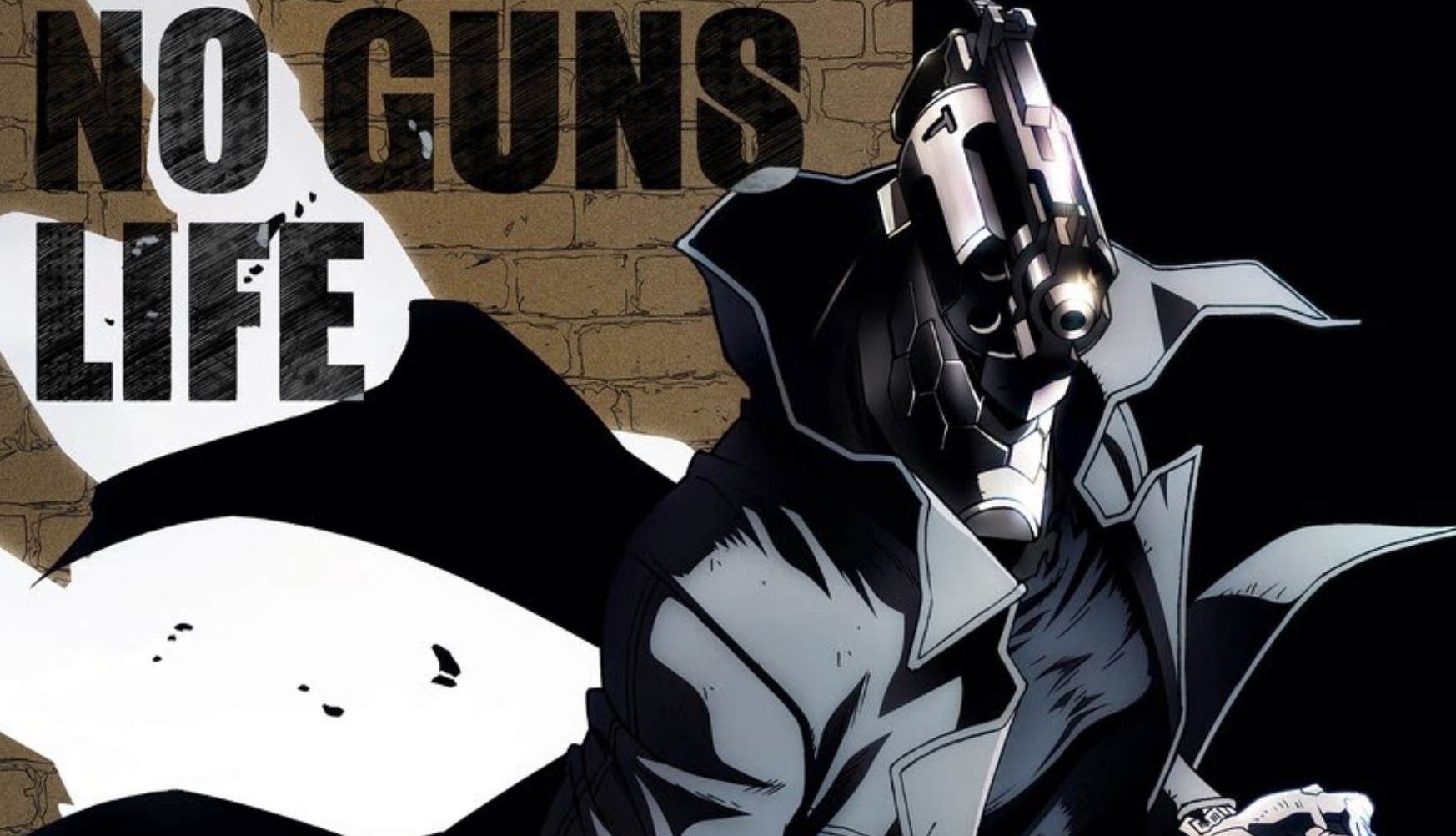 Is this show underrated? Well I personally don’t think so.

No Guns Life has been praised by a few of the more critical-minded anime folk out there as one of the highlights of the Fall season, but I have watched all of its first half (the second half will be coming next April) and all I’ve seen is a very lackluster addition to the seinen genre. And apparently the MAL crowd agrees with me, because this show has been continually falling in the rankings over there, and I don’t expect the other anime aggregate sites to be any better. I did watch Mother Basement’s video on No Guns Life to see him try and justify the show’s existence and discovered two things. First off, Geoff’s videos still suck (although I’ll still link it below for courtesy’s sake). Second, nobody else has better reasons than him in regards to explaining why No Guns Life is worthwhile as of this time of writing.

For those who don’t want to sit through Geoff’s refusal to cut down the ad space in his videos, basically he kept hamming up how the main character has a gun for a head – and I have no idea why all the Anitubers kept doing this by the way, because that’s a really poor selling point if we’re going to be stuck with Juzo for as long as the series goes on. And when he stopped highlighting that fact, he basically talked about how No Guns Life’s world was critical of real-world politics whilst failing to mention if No Guns Life was critical in a way that was actually interesting. Because I already have favorite anime that are critical of real-world politics. There are anime that aired in the same freaking season (Psycho-Pass 3 and Beastars) that incorporate real-world politics in their stories. In order to stand out from them, No Guns Life is going to have to do something pretty unique.

So I watched this show waiting for it to be this bad-ass adult-like anime that commented on the darkness of human nature whilst incorporating goofy anime logic into things. Instead, No Guns Life ended up being a prime example of how you shouldn’t rely on an “adult” presentation to carry your anime. The animation is surprisingly bad for a Madhouse series (or not if you believe Madhouse has gone to shit in recent years). There’s very little actual movement and the CG is abysmally distracting, relying a lot on camera work to convey excitement, so already the anime can’t sell me on the visuals. The show has a lot of badass men with mechanical parts and busty women who love to convey that the future accepts public cleavage, but we hardly ever get to know them outside of how they present themselves. We get a tragic story here and there regarding the Extension technology – and for those who don’t know, it’s basically cyborg technology. But the problem is, well, it’s cyborg technology. It’s very basic sci-fi stuff. Saying “being part machine makes you crazy” is old hat and you have to go beyond that to stand out. 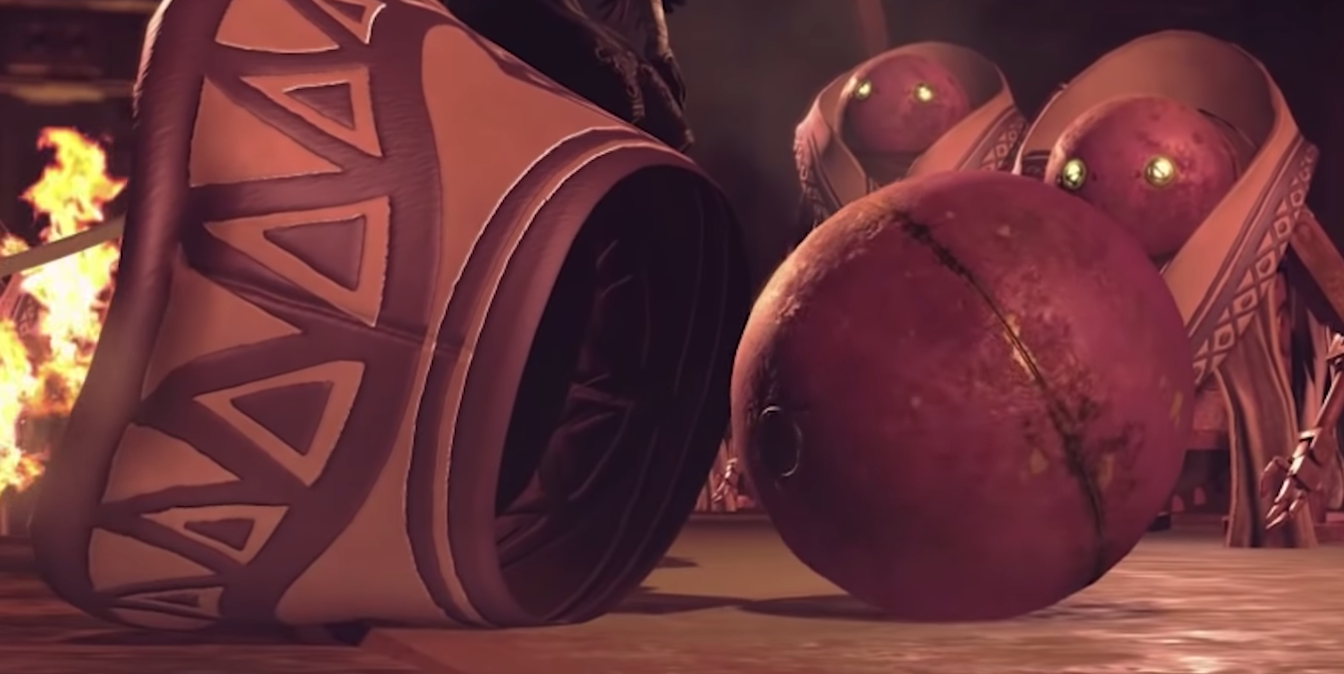 You guys remember Nier: Automata? You guys remember how it had basic twists regarding why there don’t seem to be any humans amongst the robots fighting for said humans on Planet Earth? You guys remember how the story eventually went beyond those twists to comment on existentialism in a world where life itself is kind of dead? No Guns Life is basically if you just relied on those twists as substance. The show is arc-based and so many of the arcs are just lackluster. One of the early arcs has Tetsuro, the main character who can control Extended, possess Juzo’s body to hunt an assassin and he ends up getting in trouble as a result, learning the lesson that he shouldn’t be reckless in regards to saving people. And that’s not a bad lesson if done right, but while Tetsuro grows as a result of that arc, nothing else was accomplished aside from learning what happens when you pull Juzo’s trigger. The other characters involved were barely fleshed out and we didn’t learn anything new about the world or the Extended technology itself. It really did not need two episodes dedicated to it.

Basically, for a show presenting itself as adult, the actual storytelling comes off like baby’s first seinen. The character growth is what you’d expect from people in this world and it never goes beyond that. Juzo himself, we don’t learn a lot about in this first half, so the other characters have to support him when he’s going around dealing with shit. But all we get of the other characters is “don’t be reckless” and “cyborg technology is problematic”, often leading to a tragic result. The ambitions of No Guns Life are so low that I was actually forgetting episodes a day or so after finishing them. I even fell asleep during an episode or two, but to be fair, that tends to happen when I watch anime late at night. However, I wasn’t compelled to go back and see what I missed because I didn’t care. If I can stay more alert by looking up the summary on Wikipedia (which I had to do whilst writing this because this show just doesn’t stick in my mind), that’s on the production team for not making No Guns Life fun. 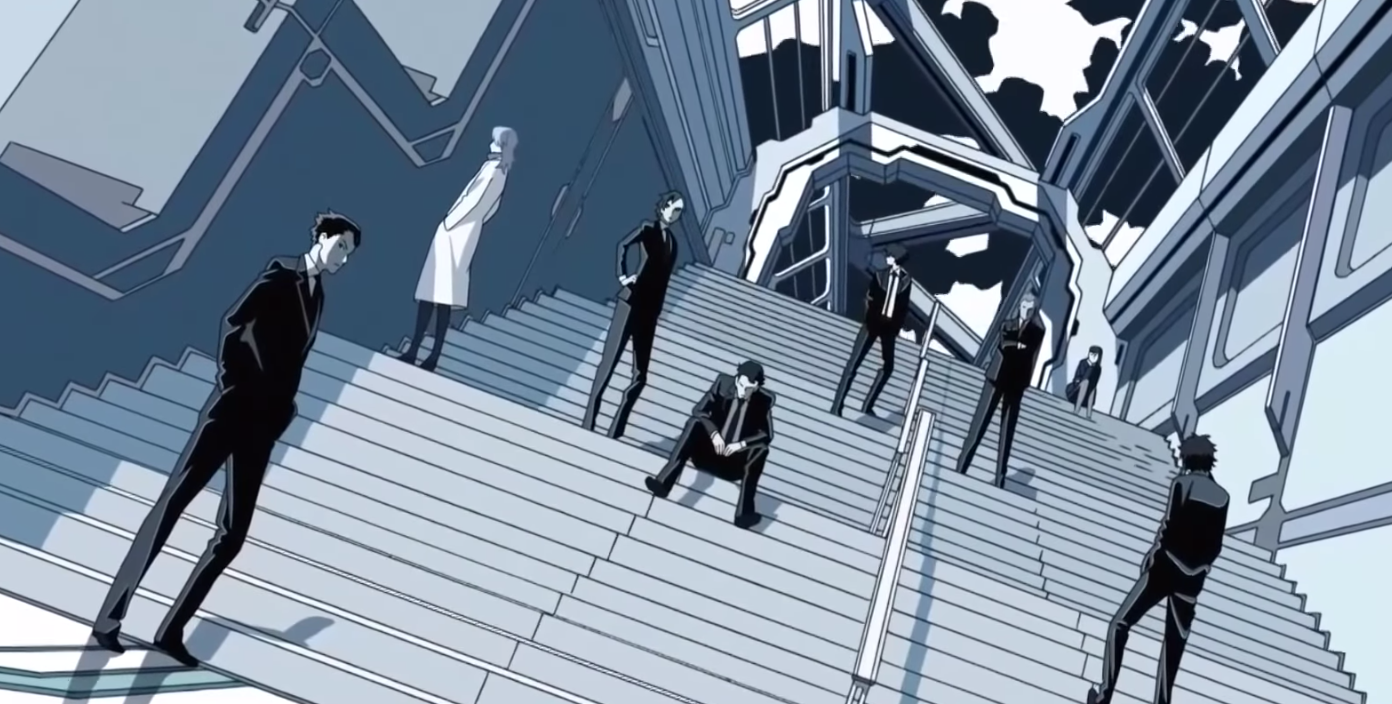 To me, No Guns Life represents a lot of what I find wrong with “adult” or “political” shows that try to sell you on, well, being adult and political. And I’m fascinated when I watch terrible shows like this, because it lets me break down what I want from this genre and how to go about getting it. It’s especially interesting because I just finished Psycho-Pass 3 a few days ago and to put it bluntly, it’s not great. There’s almost nothing distinguishable about it from any other cop show out there aside from being set in the Psycho-Pass universe. But despite having almost no world-building, Psycho-Pass 3 did have consistent character arcs for its two main leads, the action was mostly great, and the villain was…serviceable. If it just had the world-building that originally made it stand out, it would have been a worthy successor to the Urobuchi days of the franchise.

Basically, what I want from shows like No Guns Life are the positives of Psycho-Pass 3. I want Juzo, Tetsuro, and all of the characters they meet to continually grow up until they get written out, regardless of whether said growth is positive or negative. I want the show to actually look exciting rather than drowning me in exposition that only talks about the most basic cyborg shit. I want a villain or some kind of actual goal for the show to strive for, even if it’s episodic or arc-based. Because honestly, I have no idea where No Guns Life is going. Tetsuro has the ability to control Extended, but I don’t understand what the bad guys’s end game is after capturing him, and I don’t even know who the actual bad guys are supposed to be. Is it the hot chick hitting on Juzo or the government who hires him to perform tasks? You could say it’s the world itself, but the world-building in No Guns Life is so poor that I don’t see why I should care. 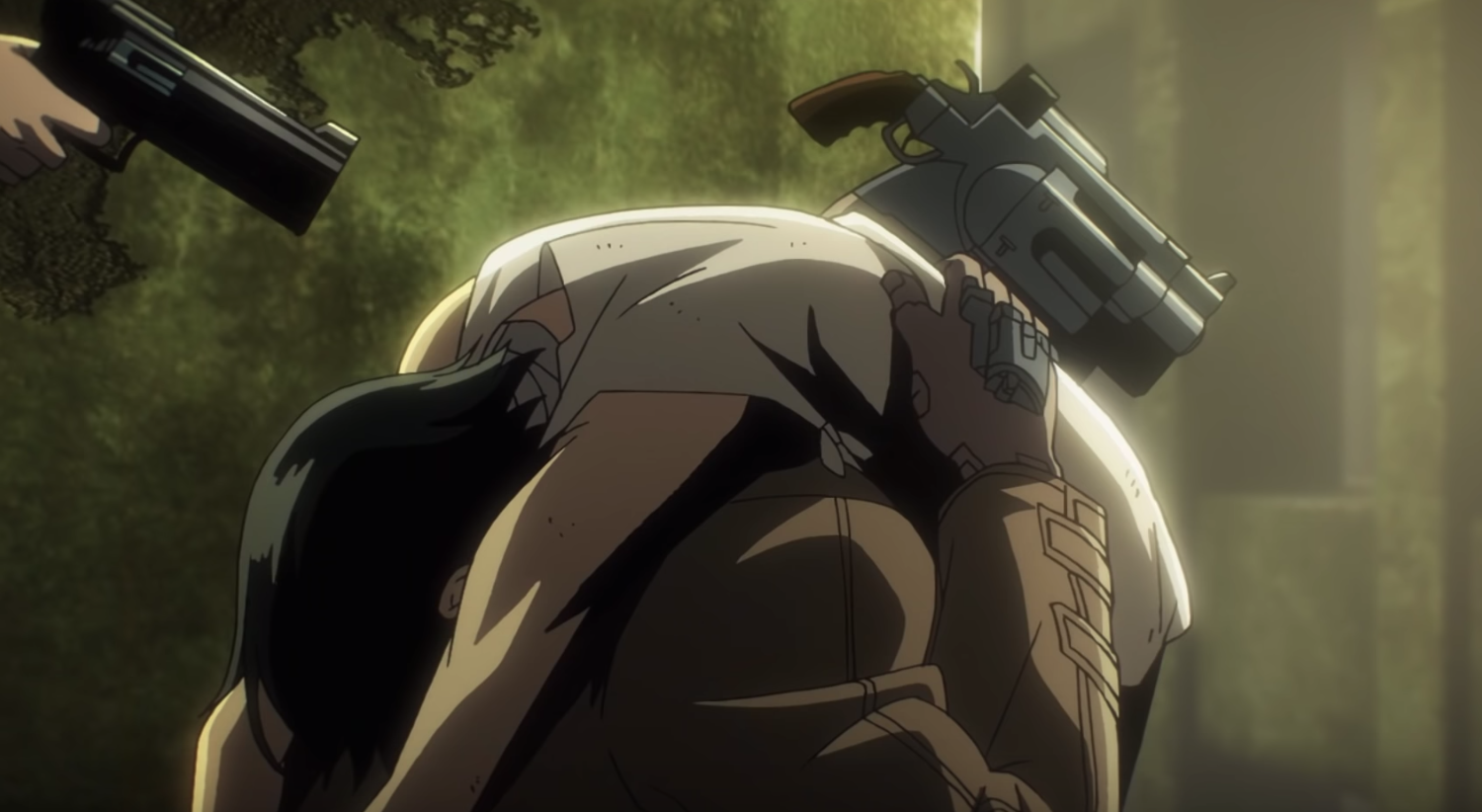 And here’s where we get to the main problem that surrounds “adult/political” stories like No Guns Life, and Psycho-Pass 3 for the record: make your world actually interesting. Don’t just have things happen in your story as a natural consequence of the setting. Actually say something interesting about the world through these actions. Don’t just go “Cyborg technology is flawed. It drives people crazy. Life sucks after war. This setting reminds me of real life. All of the women are thots, and that’s hot”. That’s not good world-building. That’s something I could write. You have to explore the ramifications of the characters’ actions more. Make the Extended technology distinct from your basic cyborg story. Not rely on a guy having a gun for a head as a selling point. If you build your world whilst still going through these plot points, that’s when your story will shine.

Also, just actually be badass. Because a fatal flaw of alot of these kinds of stories is that in practice, they’re not much better than a bunch of cosplayers having a shouting match with each other when it comes to showing off. Juzo and all of these other characters look cool, but the actions they’re forced to do don’t have much tension or interesting choreography or really anything to justify their existence. Obviously I don’t expect Black Lagoon or Gunslinger Girl to be re-created with Madhouse as of now, but again, Psycho-Pass 3’s action was pretty dope. The fight where Kougami and Ginoza had to face the new characters is definitely worth watching on its own. And it helps that they’re using actual martial arts techniques in addition to great sound design for that scene.

Obviously I can’t remember every fight scene in No Guns Life, but I don’t recall seeing an action scene on this level, and whenever I fell asleep watching the show, it was always during an episode that was mainly exposition. 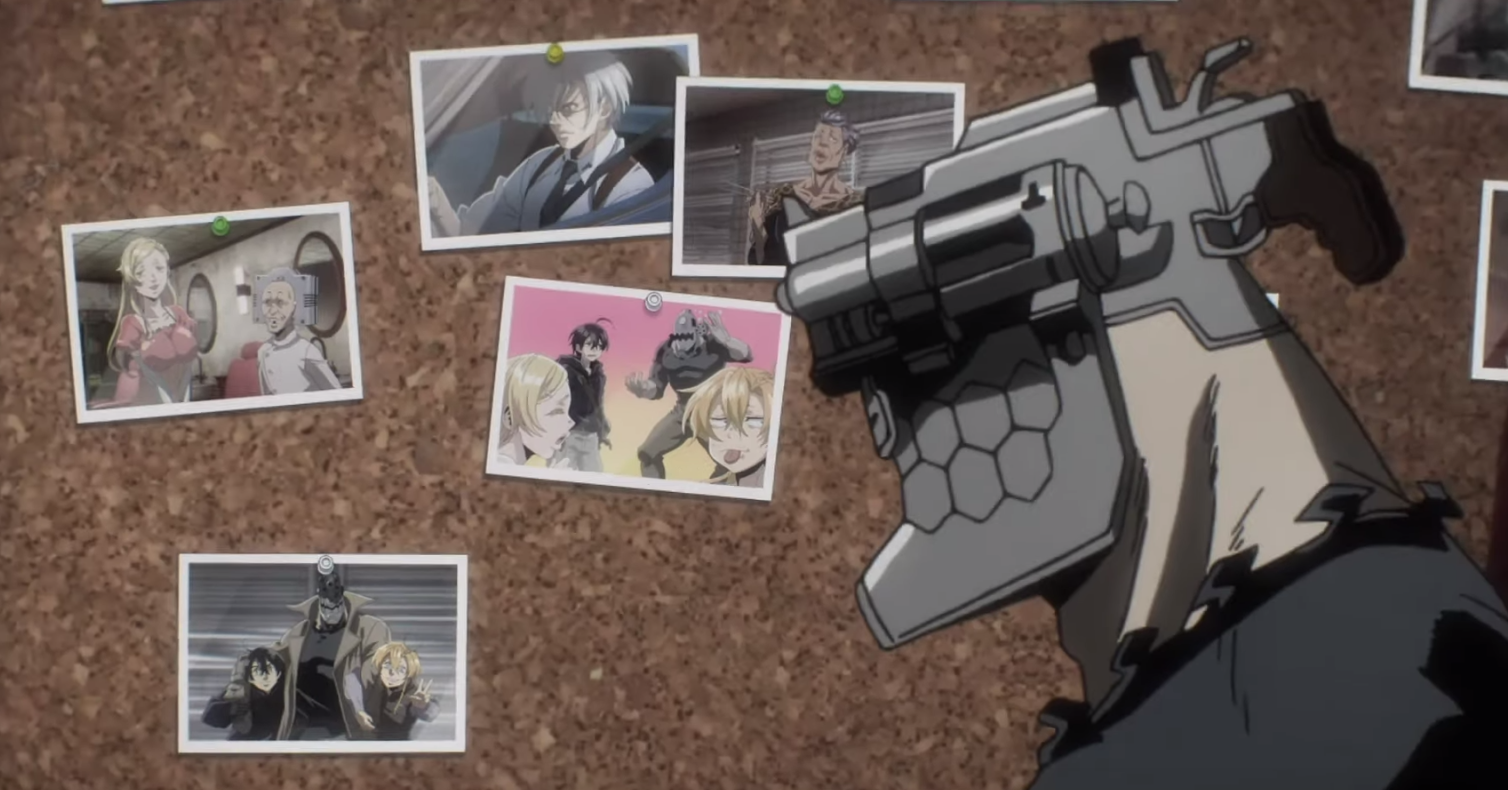 So to sum it up, No Guns Life represents everything wrong with an “adult/political” anime done poorly rather than living up to its reputation as the cult classic some people are making it out to because it lacks the consistent character arcs and overall animation/attitude that Psycho-Pass 3 has. And the problem with both those shows is that they lack the world-building necessary to make their stories stand out. Only when this type of anime has all of these elements does it truly stand out, and hopefully when the next show if its type comes out, it will understand this.

P.S. For some reason, the final episode of the show had a big improvement on the visual front. The self-contained story for that arc wasn’t awful either, but by then, it was too little too late.