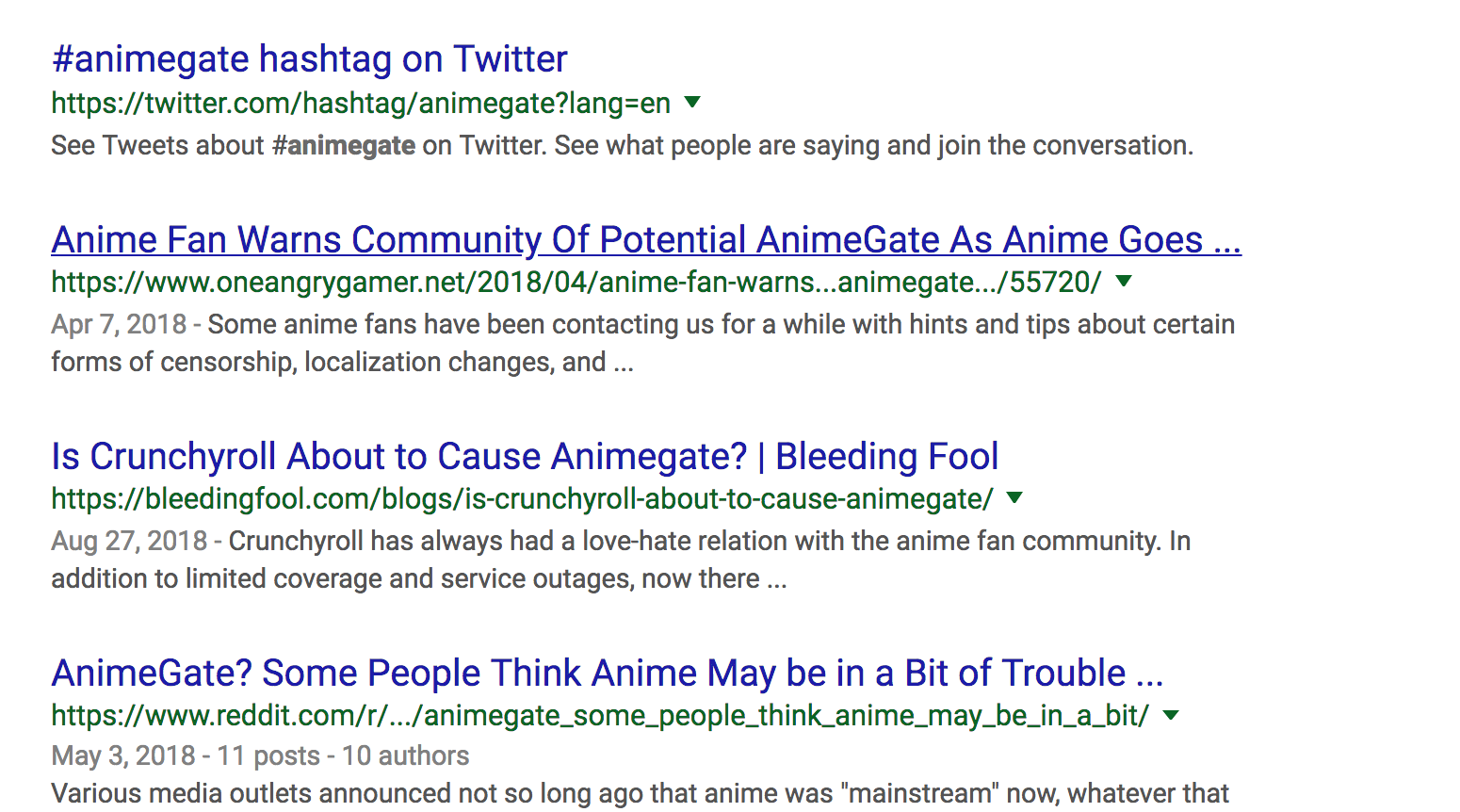 No, that “grrls” is not a spelling error.

Anime journalism has never been the most well-respected business so to speak, but a combination of over saturation and progressive thinking has caused it to become a mini-version of games journalism. When they’re not just highlighting the same overexposed anime over and over, they’re pushing their own opinions to the public or  halting the review’s flow to highlight all these individual names working on the project that I can’t be bothered to remember and isn’t going to affect my opinion of the show in any way. As someone who spent a good chunk of the blog’s time making these same mistakes, I know everything that defines bad journalism: namely when you’re not focusing on the very anime you’re supposed to be championing. Trust me, those terrible (and now non-existent) posts I made on Rose of Versailles and Yuri on Ice are going to haunt me for years.

But even amongst the horrible agenda-pushers out there praising or decrying anime for the stupidest of reasons, I was not prepared for garbage like this. 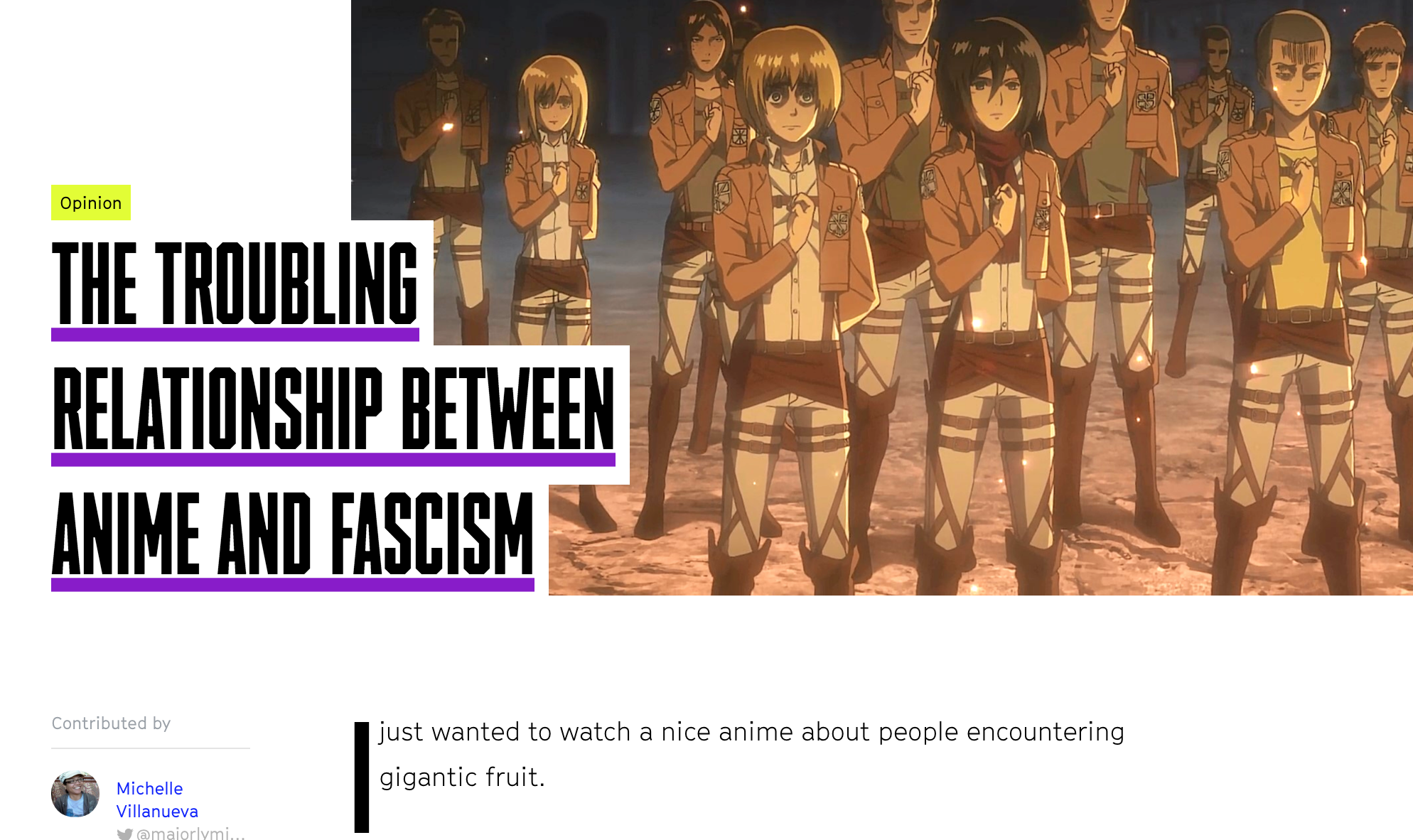 You ever notice that when anime journalists or Youtubers focus on themselves at the expense of the anime they’re supposed to be talking about, they do so in the most obnoxious drawn-out manner possible? I honestly don’t understand why anyone would ever assume the majority of your audience would give a shit about your personal life and experiences. It’s like going to one of those godawful fan panels that talk about how you became an anime fan in the first place. Yeah that’s fun to discuss with friends, but absolutely boring if you’re a stranger. 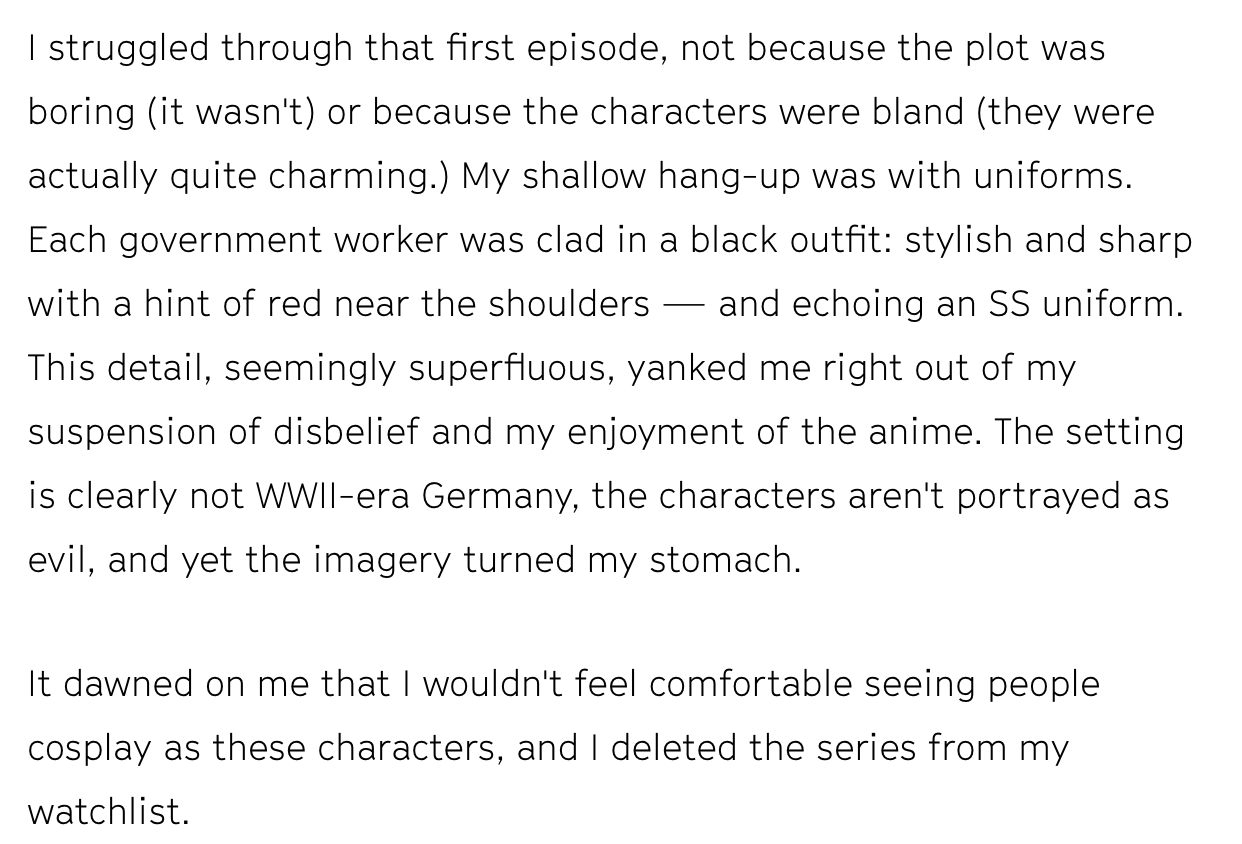 And this writer from SyFy just talks on and on about her problems with fascism whilst throwing in specific anime like it’s an after thought? You couldn’t sit through the first episode of ACCA because the uniforms offended you? How about not liking ACCA for the same reasons I didn’t? Like the boring dialogue? Or the lack of character growth? Or the uninteresting narrative that thinks ambiguity qualifies as a hook? Nope. It’s because the clothing looks like Nazi uniforms. Hey, have you heard of a series called Code Geass? Or Tanya the Saga of Evil? 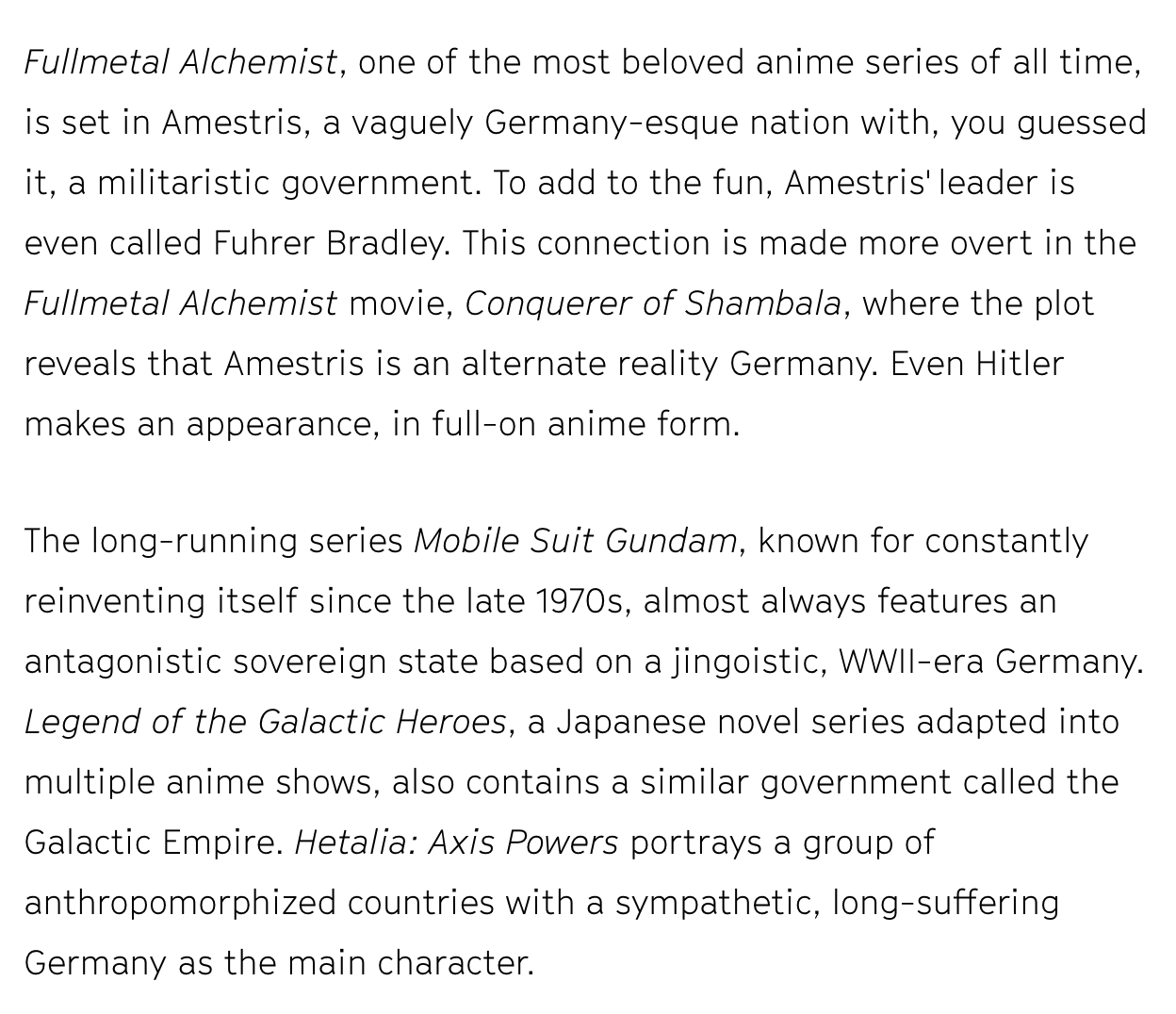 Well she’s definitely heard of Fullmetal Alchemist and Gundam if you read the article. But honestly, I don’t think she’s even watched them, because the amount of misrepresentation she gives both series just to decry their usage of fascist imagery isn’t just tunnel vision. It’s a literal sickness. It doesn’t even accomplish what it sets out to do, because it doesn’t say anything about fascism other than “it exists”, and there’s no real attempt to explore how fascism affects any of the anime that she talks about. And that’s a problem with a lot of anime writing these days: they never say anything interesting either about the anime or the subjects surrounding the anime. They block out so much of what makes anime terrible just to highlight what they enjoy.

Oh, and saying irony is dead in today’s world? The main ingredient needed for comedy to be funny? Why don’t you just get a job at Polygon aka the worst gaming journalism site in the world?

Seriously, it’s just freaking anime. It’s not real. It’s never going to be real. And it’s because it’s not real that so many fans love and bond over it. Why do so many idiots constantly try to connect this medium to their personal lifestyle choices? To politics? And if they’re going to do so, why is the connection so bad? The uniforms were all you needed to label ACCA as fascist? Not the characters’ personalities or what you could see of the story?

This is what qualifies as anime journalism? No wonder I stopped reading blogs and other articles. But if you guys think my blog is one of the few worth reading, like, comment, subscribe, and I’ll see you tomorrow.