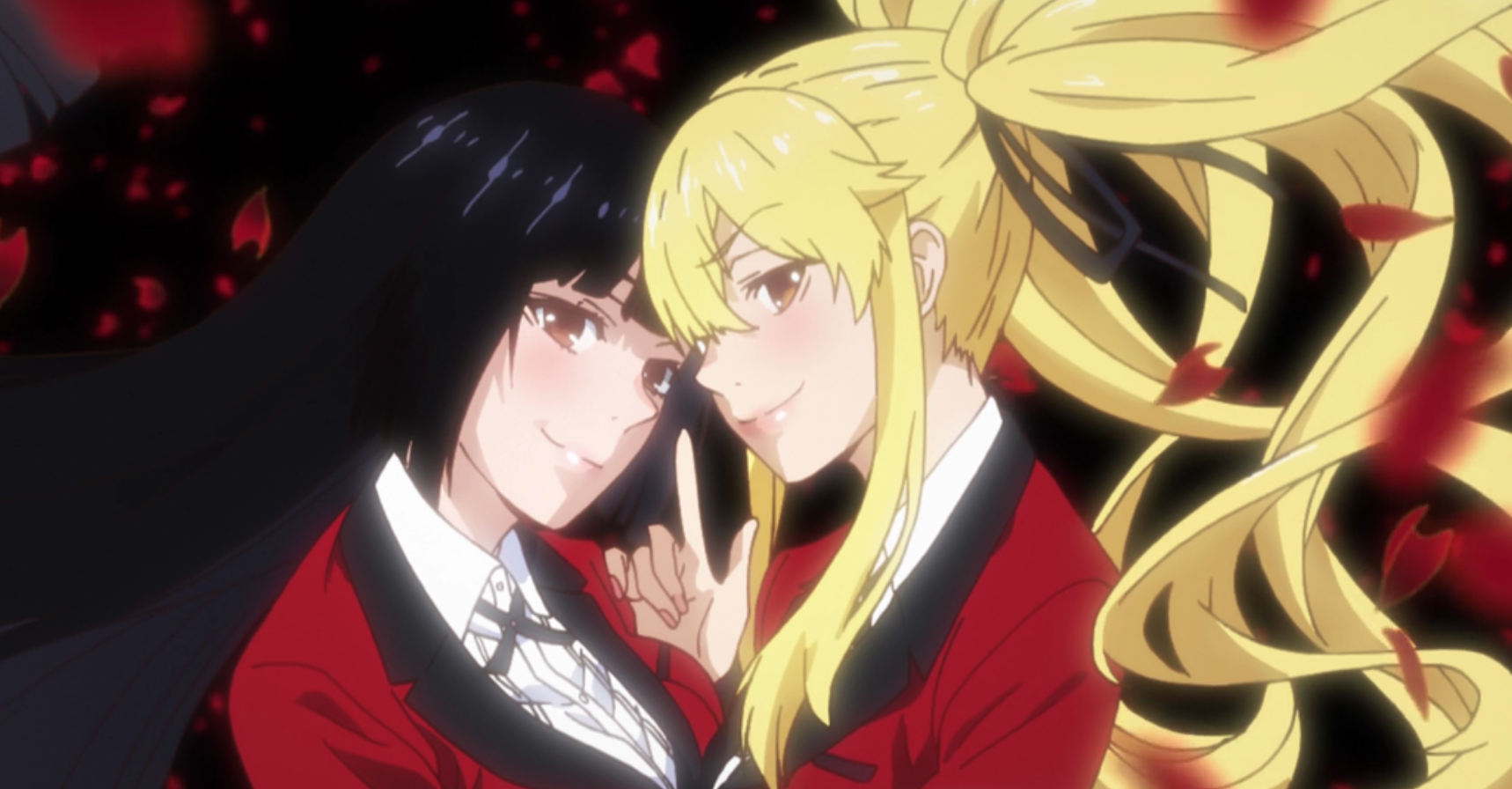 I wouldn’t be surprised if some of the cast in this anime transferred from Prison School.

I don’t have any favorite anime studios, but I have some I trust more than others. Basically, if you don’t make light novel adaptations and aren’t Production I.G., you have a higher chance of getting a fair shot than Silver Link. One of those studios was MAPPA, the second coming of Madhouse back when they were good, who admittedly I overhyped when they really started to gain traction because they had a tendency to suffer production issues even in their biggest projects, and they haven’t really made the best progress in terms of fixing them like Wit and Trigger eventually did. Thankfully, I managed to rein that hype in to notice before 2017 even started that they were doing the A-1 Pictures thing of releasing a lot of shows at once to the point that most of them were definitely going to suffer. And it turned out that year proved me right, because whenever their shows weren’t godawful, they looked like they were produced on an elementary school kid’s budget. Sure didn’t stop the subject of this review from getting big though.

While Made in Abyss was ultimately the anime that people remembered from the summer season of 2017, Kakegurui (which translates to Compulsive Gambler) was the most popular show during airing, which just goes to show how back-and-forth Netflix’s restrictions can be in terms of generating discussion amongst the fandom, isn’t that right LWA? I guess the fact that we had to wait four months after the series ended to watch it legally outside of Japan really motivated some folks, including me. Never actually wrote anything about the series itself because complaining about, let alone giving attention to, something you stole sounded very off to me – especially in this age of legal streaming. But now the series is finally on Netflix world wide, so I can properly review this and answer the question: was it worth the wait? Or is it just worth watching in general?

Kakegurui takes place in an elite private school where the entire student hierarchy is decided through gambling and follows the exploits of the titular compulsive gambler herself, Yumeko Jabami, as she upsets the status quo of the rigorous academy like the modern-day Jungian trickster she is. You know how anime tends to exaggerate student councils like they’re White House staff? Well in this universe, the student council president and her cronies literally control the futures of any student who’s debt-ridden or low on the social ladder, so of course they’re going to have a problem when this new girl keeps pulling out unexpected wins and directly takes away their power in the process. However, beating this girl is tougher than any of them could have expected, because she has insight as sharp as her meme-worthy lust for gambling. Oh and just so we’re clear, you’re supposed to be rooting for Yumeko, although the colorful personalities of the student council members might make you want to root for them too.

There’s not really much of a plot to speak of in Kakegurui beyond the basics. Yumeko plays games against multiple opponents in order to work up to the student council president herself, who’s said to be the main reason why the academy has turned into a hierarchical shithole. However, since this is based on an on-going manga, we’re obviously not going to get any real resolution from this show, although it does speed through a lot of the important plot points at a breakneck pace. I think like six or seven volumes were covered in this first season alone, although that also means we won’t be getting a sequel anytime soon. Just going to say right now that despite the sequel-bait ending, I think Kakegurui can stand on its own for the most part. Whether it’s good is another story.

Now I’m sure when you think of gambling anime, most people would think of former Madhouse classics like Kaiji or Akagi. Well those people better throw out those pre-conceptions before they even think of adding this to their Netflix queue, because Kakegurui is more of a show you watch for camp value rather than something you watch because you want to see a sport represented accurately. Most of the games are less about strategy and more on “who can cheat the best and make the most hilarious face whilst doing so”. And of course, the show follows that trope where if you explain your plan to the audience, it’s going to fail very hard, so it’s really easy to determine who’s going to lose three minutes before they actually do.

As far as camp goes, I actually found Kakegurui quite entertaining. It has the same sort of appeal as something like Prison School in that it derives its humor by playing on the trashy aspects of the plot seriously, but in an obviously self-aware sort of tone. Most of the cast is female and by god do these girls take every opportunity to masturbate in front of the camera both figuratively and literally, because apparently gambling raises hormone levels higher than Channing Tatum putting on a strip show, and it’s not very funny when males do it. However, Kakegurui has more momentum than Prison School and other crazy comedies for that matter, due to Yumeko challenging increasingly tough opponents at a rapid rate. A lot of you guys already know I prefer comedies, especially anime ones, to have on-going story that can hold up the jokes when they fall flat. And they will always fall flat because anime as a medium just doesn’t do comedy very well, and trying to make me laugh with empty jokes for that long a time is just asking too much of anything.

Mind you, the humor probably would have been better if the animation wasn’t such dogshit. This is the same director as the one for Garo: The Carved Seal of Flames, and while he does a good job when it comes to timing the crazy, he’s still getting let down by some of MAPPA’s worst production choices. It’s not too big a problem during the early episodes, although the character models can look a little weird, but during the idol arc where they have the characters sing over a still picture of themselves, it can be very distracting. Plus, I know what cost-saving close-ups look like, Kakegurui. I’m not that stupid. 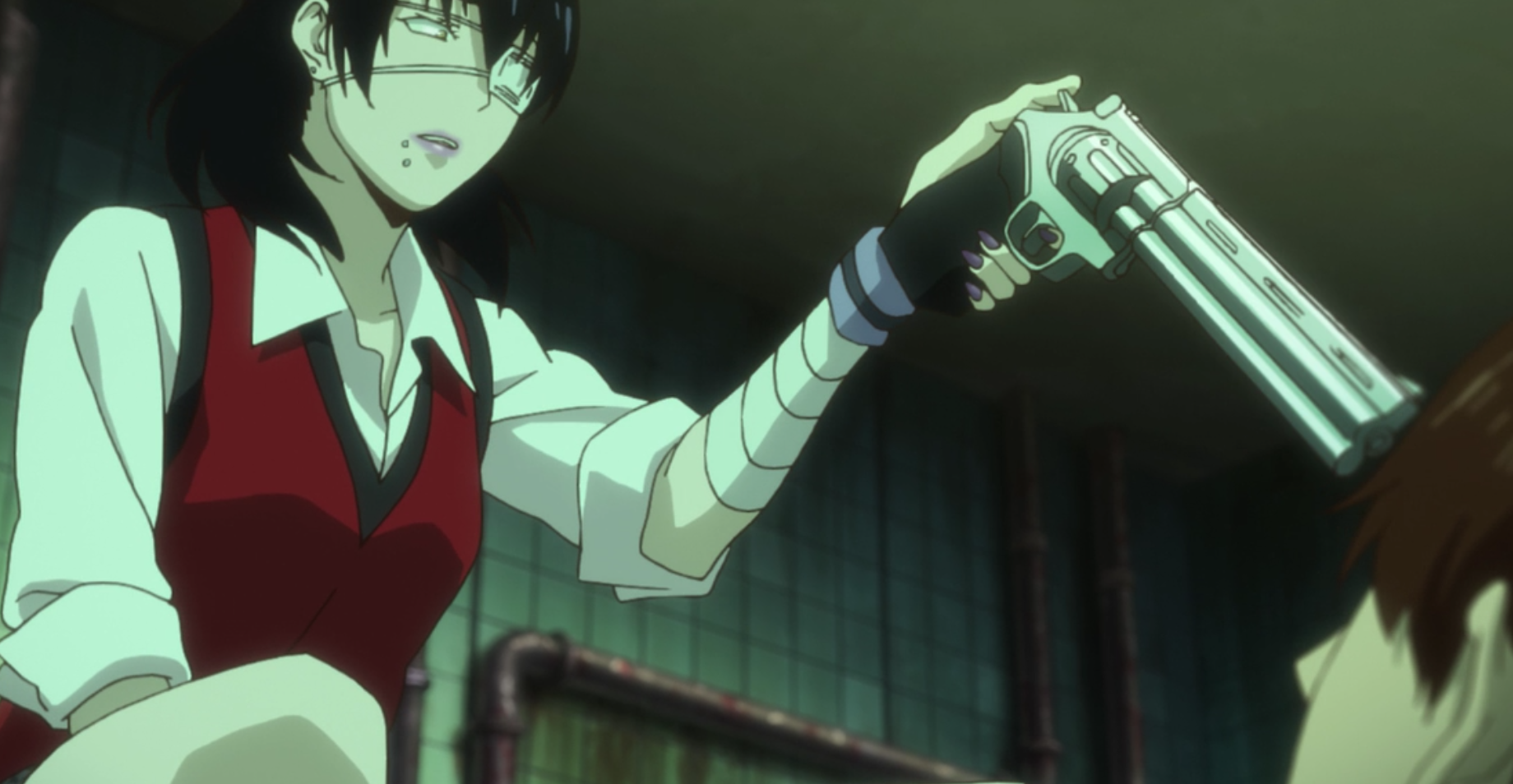 Just so you know, there are six bullets in this chamber.

But for the most part, the directing and style is good enough to keep the show visually interesting amongst all the eye poison. And if they don’t keep you engaged, Crazy Face #55 definitely will. Like I said, the plot is pretty simple, but there are actually enough twists thrown into the formula so that things don’t get too stale. Most of the characters tend to have reasonable characteristics underneath their crazy “I’m better than you” attitudes, and the more repugnant ones tend to get their just desserts, Ace Attorney-style.

Not really much else to praise about the show, which is both a blessing and a curse in that it does everything it needs to do, but what comes after that? Well the dub is alright, although the pronunciations will likely cause weeaboos and anyone else with ears to immediately switch to the Japanese version unless they want to make “but that’s Kayaday’s lie” jokes whenever this anime’s Kaede shows up. The “oh crap we need to end the show now” ending isn’t horrible, but it’s a big pace killer compared to everything that’s come before. There’s probably some other issues I can’t think of at the top of my head, but none of them are deal breakers.

However, when you get down to it, now that I’ve finished Kakegurui twice (and the second time was mostly just for review purposes), I will most certainly never finish it again. With shitty visuals and characters whose endearing qualities and complex motivations are more of an afterthought to the show’s style of craziness, there’s just not much point in buying the blu-ray, even discounting how Netflix will never remove the anime they have officially claimed. I can’t even really say it was worth the wait. Most Internet people will have seen the memetic captions and thus be familiar with the show during its peak, which will inevitably lessen the impact. Plus I doubt the demographic of people who put this in their favorites list is larger than the hairs growing on my ass.

Bottom-line, Kakegurui is fun to watch during the moment, but I’m already moving on from it like a one-night fling with a not particularly attractive lady. That’s the issue when watching anime like this and Lu Over The Wall that get by more on campy appeal and standout set pieces rather than intricate narrative design and visual storytelling. Sure you can remember enjoying it, but that’s not exactly a terribly future-proof mindset to have, is it? Lots of people remember enjoying Elfen Lied during its heyday, but I wouldn’t exactly trust your current opinion of it if the only thing you can remember is how brutal the frankly badly animated massacre at the beginning was.

Basically, the best thing to come from Kakegurui is going to an anime convention and seeing Yumeko and Mary cosplayers holding hands. Sure I’d love to take pictures of that, but I don’t exactly have to see the actual show to appreciate it. I like photographing D. Va cosplay and my Overwatch experience is limited to a tutorial and one mission that I don’t even think was official.