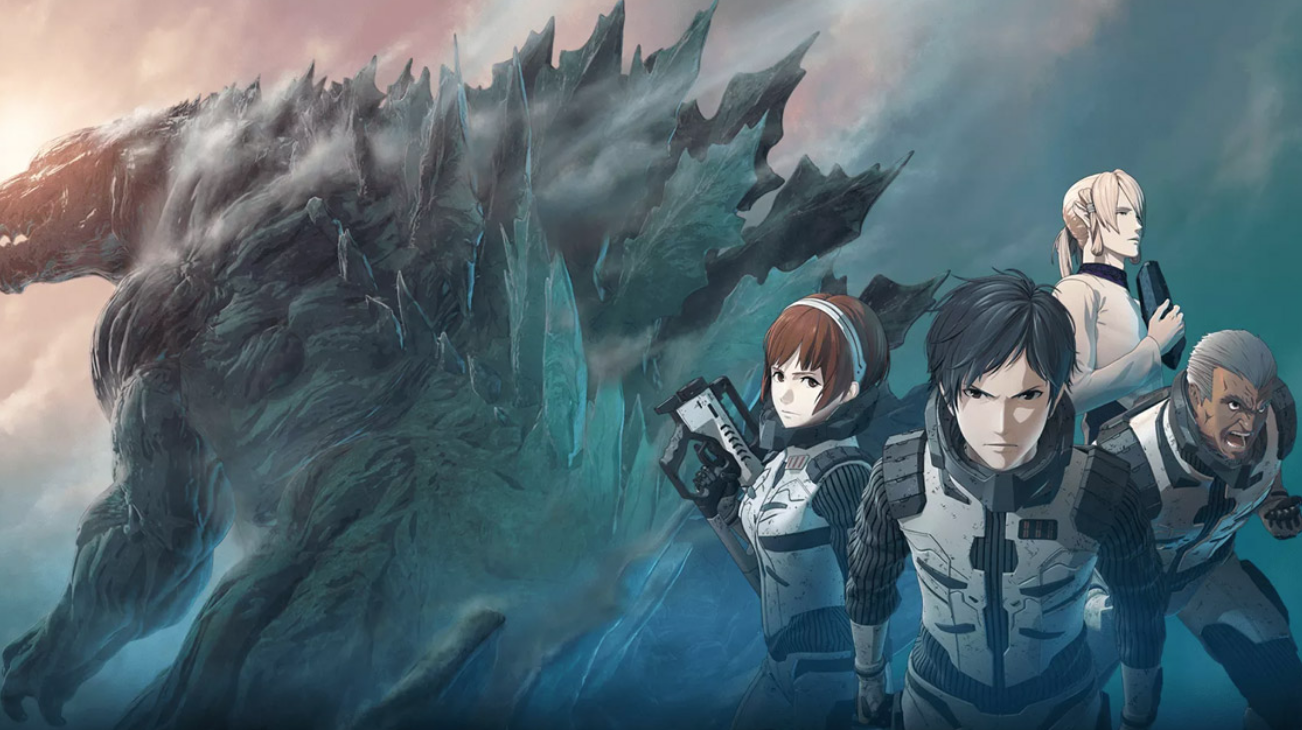 Open the door, get on the floor. Everybody walk the dinosaur.

I wouldn’t say I’m a fan of Godzilla necessarily, but I’ll admit that recently I’ve gained a growing interest in his legacy from the nuclear weapon themes he’s supposed to represent to how plain cool he is in general. When it comes to action camp in this modern era, his latest films have absolutely nailed it from the incredibly self-serious tone despite all the wackiness surrounding the characters to the intense scenes of Godzilla shooting his traditional laser beams at buildings and sometimes other monsters. So naturally, I was pretty excited when I heard that he was going to be coming to the anime world, and Polygon Pictures was definitely the studio to do it. Despite their substance being a mixed bag and their CG animation looking like dog piss, Polygon is generally a studio who you can count on to deliver in terms of intense atmosphere and campy storytelling. And since no one really cares about the human characters in a Godzilla movie besides when they’re being used as stereotypes in service of the monster’s epicness, that means Polygon’s usual characterization problems won’t be a hindrance.

And not only are we getting a Godzilla movie from these guys, but we’re getting three. Yeah, this new Godzilla project is actually a trilogy of films that not only stars the titular monster, but several other creatures that spawned from his legacy, including Mechagodzilla. Because it’d be a missed opportunity to make an anime adaptation of the lizard and not have Mechagodzilla, now wouldn’t it?  Also, the movies are written by Gen Urobuchi, who I’m pretty sure at this point needs to have his nickname changed from Butch Gen to Genre Jesus, because he’s always called upon to write something whenever some old genre needs to get revived. 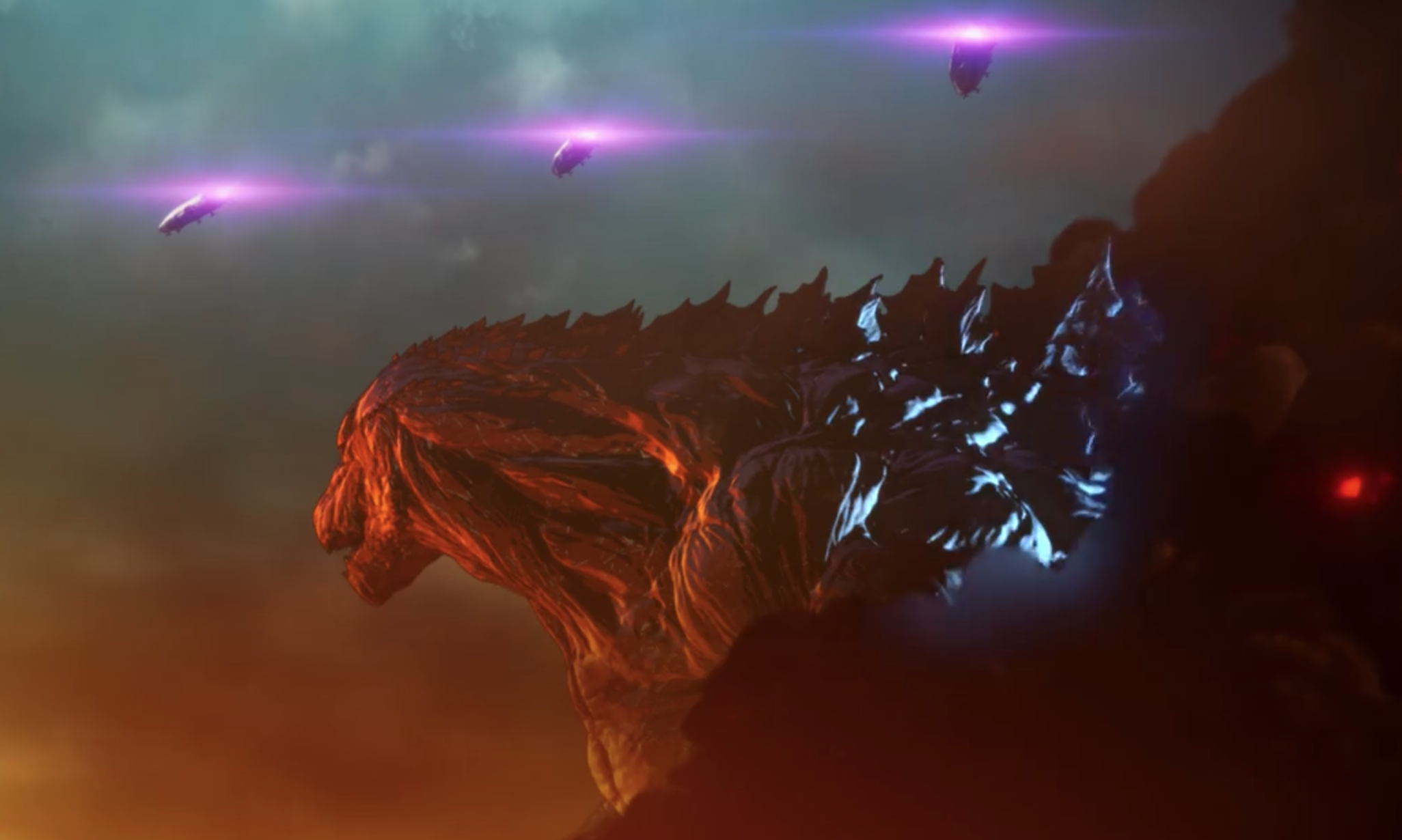 Did Godzilla always have a nuclear back? I can’t recall.

He brought back interest in the magical girl genre with Madoka Magica. He recaptured the spirit of 80s-90s cyberpunk anime with Psycho-Pass. He brought Japanese puppetry to a somewhat mainstream audience with Thunderbolt Fantasy. And now he’s called upon to bring Godzilla to the anime audience because apparently the one for the American audience and the one for the live-action Japanese audience just wasn’t enough. Want to try bringing anime adaptations of classic literature back whilst you’re at it, Gen? I’m sure Alice and Wonderland will gladly welcome your touch. Moreso than American McGee’s at any rate.

But does he succeed with this property the way he succeeded with Kamen Raider Gaim and Thunderbolt Fantasy? Well…no. The film wasn’t a big success in theaters and the anime community on the whole isn’t quite into this the way they were into puppets. Do I personally think he succeeded in making a good Godzilla movie though? Read on to find out.

Godzilla: Planet of the Monsters takes place in a far-off future where the giant monsters (with Godzilla being the most powerful of the lot) have conquered all of Earth and humanity has teamed up with an alien race to get the hell out of dodge and find a new planet to live in. Unfortunately their attempts to do so have mostly ended in failure, and after years of searching, they decide to go back to Earth in the vain hope that this new race of dinosaurs have become extinct in the twelve light years they’ve been away. However, Godzilla is still alive and his presence has actually changed the planet’s biosphere to the point that the humans might as well have landed on Counter-Earth from Spiderman Unlimited, because good luck repopulating on a planet with giant pterodactyls flying everywhere and snatching you up like you’re a British rabbit.

As such, the humans and the aliens decide to kill Godzilla, hoping that its death will cause all the other monsters to follow suit, and it didn’t exactly help that the equipment needed to get back into space becomes wrecked by the ecosystem whilst exploring this new Earth, so they didn’t have any choice. The final act is basically one long battle against the monster with an outcome that is both expected and not expected at the same time before ending on a cliffhanger that indicates Earth isn’t as lost to the humans as it initially appears. Oh and because this is a Gen Urobuchi movie, expect a lot of deaths on the way to that cliffhanger.

Similar to previous Godzilla films, the majority of the screentime is spent on a bunch of human characters who are mostly defined by reacting to Godzilla and having arbitrary backstories so that they’re less developed and more fuel to add to the awesomeness of the giant lizard’s atomic powers. Also, I’m guessing the staff at Polygon Pictures really love making those adaptations of Tsutomu Nihei’s post-apocalyptic space operas, because that’s the only reason I can see for why the story is heavily sci-fi oriented this go-around. The majority of the first act is pretty much standard space opera fare where you’re introduced to the characters, alien politics, and the dangers of traveling in space. And even when we go back to Earth, it mostly stays steeped within the confines of the sci-fi genre.

I’ve seen some mixed opinions on how it executes these trappings, but I thought it was fine for what it is. Sure the lead character is an angsty idiot, but at least you can understand where he’s coming from since the film makes it very clear just how much Godzilla has taken from him. And I found all the dialogue regarding humanity’s failure to find a new planet to inhabit along with the distrust between the humans and the aliens to be engaging because of how it highlights survival during conditions that are far less than favorable. Yes the characterization is only barely higher than a product of Hong Kong’s golden age, but the narrative is structured in a way that allows for that. It’s kind of like the difference between those 80s-90s action films that were mostly defined by being a man and the action films of today that are mostly superhero-oriented. The superheroes may have more involved characterization and on-going story arcs, but on the whole their films are weaker than when Van Damme and Stallone were in their prime because the baggage they introduced in trying to go for more structure is too numerous to overlook.

In my experience, as long as the characterization is actually lending itself to the narrative in a way that isn’t retarded, they don’t all have to be shipping material. It’s generally not what I prefer, but I’ve seen characters whose development have gotten in the way of the story before, and of course I’ve also seen characters whose lack of development got in the way of the story as well. Planet of the Monsters, and these Godzilla films on the whole for that matter, tend to find that sweet spot in regards to portraying the humans and the monsters, and since the appeal is supposed to be camp, it can get away with lack of structural depth moreso than an Oscar-bait drama. Plus I dare you to not laugh at any of the sudden deaths this movie throws at you like fried wings at the all-you-can-eat chicken buffet. 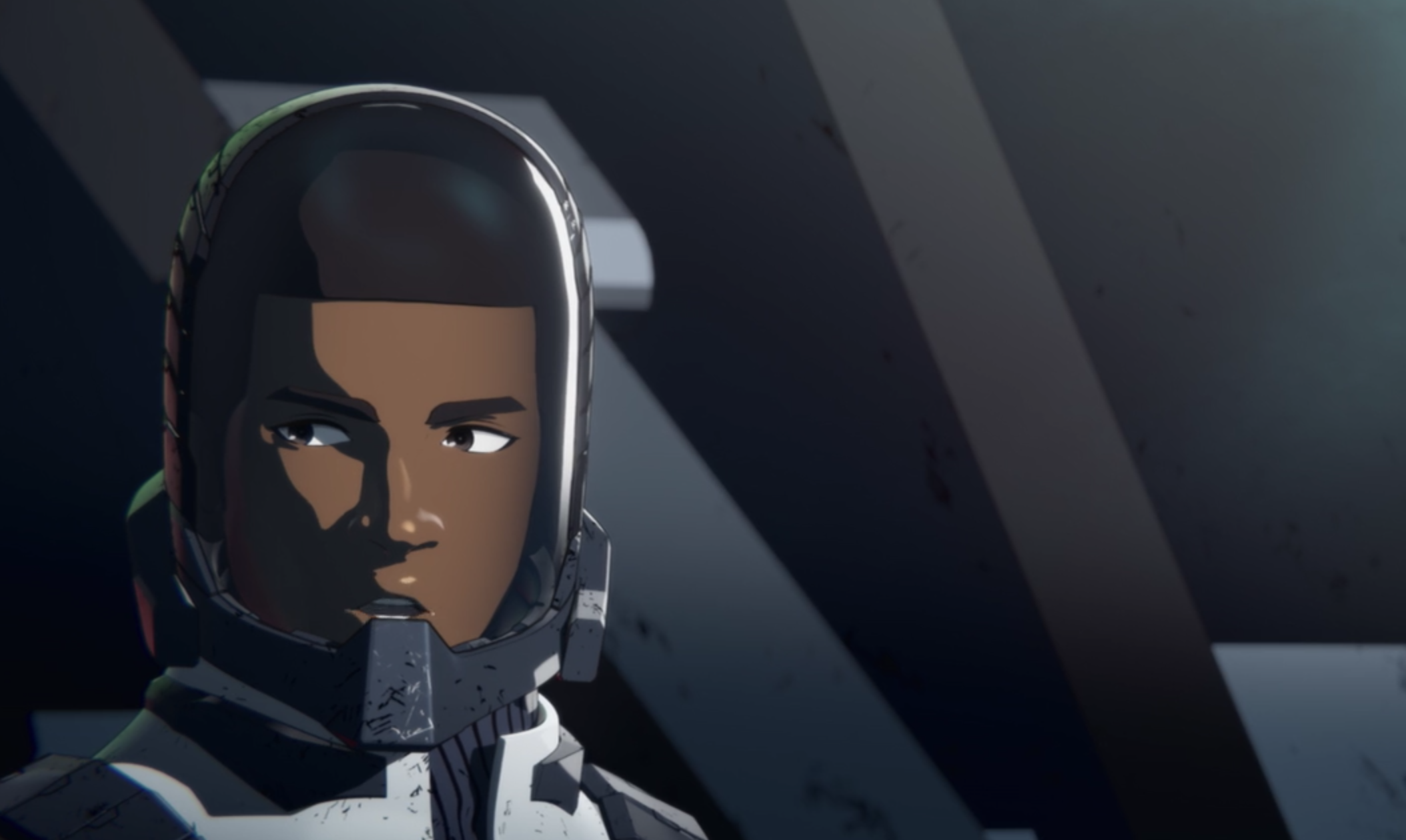 I’ll leave it up to the viewer to discover whether or not the black guy dies first in this.

Compared to Shin Godzilla and the like, Planet of the Monsters is a very bleak take on the giant lizard’s legacy. Every time there’s a brief glimmer of hope, humanity tends to get fucked by a surprise plot twist, and ten more people die as a result. Instead of nuclear themes, the story seems to be more about man vs nature, except nature is portrayed as a malevolent force that you’d only want to protect if you’re a hippie that also happens to be a hipster. It’s all engagingly cynical, never truly denying the possibility of a happy ending, but making it clear that you’re going to go through hell getting there.

Settings and environments are engaging despite the CG, although I don’t think Polygon Pictures score points for that anymore given how it’s practically a requirement to be one of their noticeable anime at this point in time. The monsters are really well-designed with the camera angles and music choices giving them an epic scale even when they’re just standing still. However, the action also has that usual Polygon Pictures problem in that the actual scenes are incredibly cluttered so it’s hard to make out what’s happening a good chunk of the time. Sure it’s a step up from beam spams and Jojo poses, but I’d also rather be able to visually digest coolness rather than dig it up. Especially when it takes up the entirety of your last act.

Most importantly though, I found the visual lore to be engaging. A big part of the reason I wanted to continue watching is because I was very interested in seeing how humanity has evolved over the millennia spent with these monsters. What’s their civilization like now? Is a future on this planet even possible? And what exactly is motivating Godzilla and these mysterious aliens anyways? I don’t honestly expect all of these questions to be answered, especially when you consider that mysteries tend to stop being interesting the moment you explain the mystery. Still, I’m definitely hoping for new things in the future, and hopefully those questions can function as a viable medium to introduce them.

As a Godzilla movie, Planet of the Monsters doesn’t really excel at anything in particular aside from proving that you can insert the giant lizard into the setting of Blame and have it make sense, but it gets all the basics right in terms of how to make enjoyable action camp and I’m definitely looking forward to the other two films. However, I’d recommend the 2014 adaptation and Shin Godzilla over this because in addition to preferring them, even as the first part of a movie trilogy, Planet of the Monsters is not as standalone as it should be. It really does feel like an overly long first episode rather than the only good installment of the Matrix trilogy.

Regardless, it is worth your time if you’re interested in Godzilla and want to see how big he can actually get in a film. Don’t watch it if you’re only interested in Mechagodzilla though, as that thing doesn’t show up until later.

3 responses to “Anime Review: Godzilla Planet of the Monsters — Creatures of Sidonia”