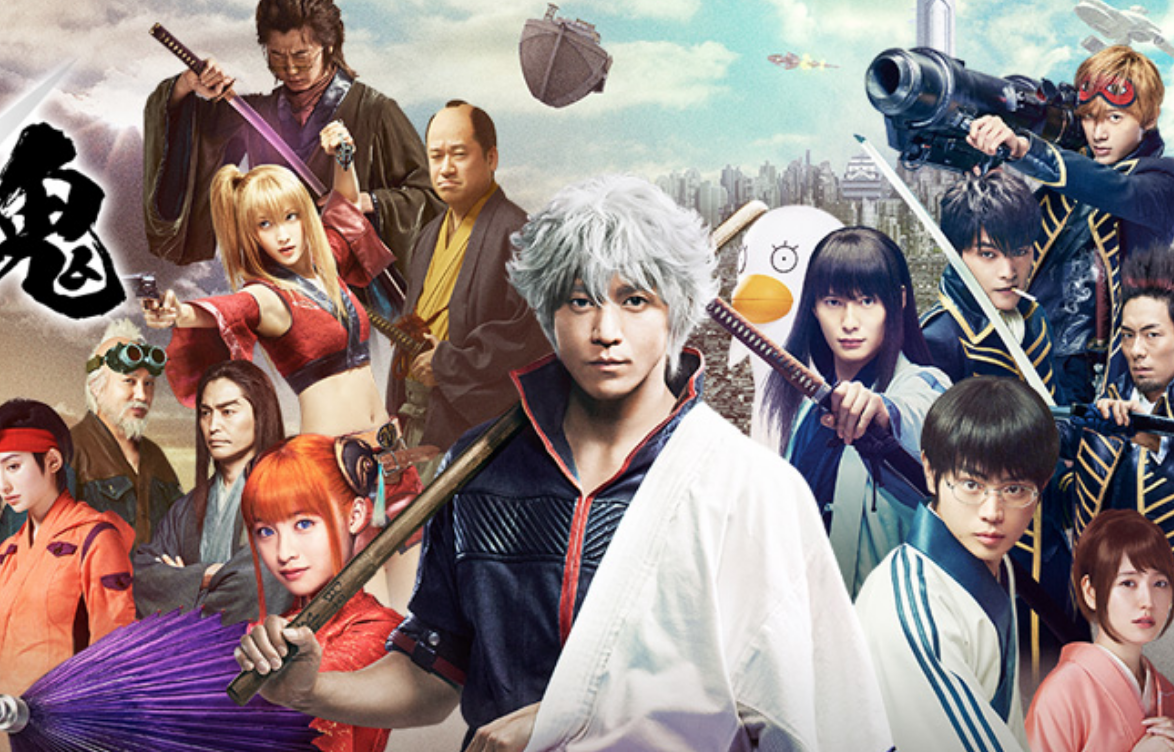 Live-action Gintama is a thousand times better than manga/anime Gintama. Fight me!

I don’t really have much of an opinion on live-action adaptations of beloved anime, but I’m not exactly disagreeing with the crowd who consider them to be an atrocity, because most of them are pretty horrible. Occasionally you get your live-action Speed Racers and Rurouni Kenshins, but even if you ignored the Hollywood adaptation of Ghost in the Shell and the Netflix adaptation of Death Note, you’d still be left with Japan’s live-action adaptations of Attack on Titan, ERASED, Fullmetal Alchemist, and Parasyte – which weren’t very well-received in their home country let alone in America. Now I haven’t seen all of those, but the ones I have were about as entertaining to watch as a CBS sitcom, and I somehow doubt that the reviews centering around the live-action Fullmetal Alchemist were wrong. Couple that with how you’d go out of your way to watch most of these adaptations to begin with, and personally I doubt I’ll ever watch the live-action Silver Spoon in my lifetime.

The recent live-action adaptation of Gintama however did not receive the lukewarm-at-best reception its predecessors got. On the contrary, the movie ended up becoming the third-highest grossing film in Japan in 2017, which I suspect is part of the reason why it’s one of the few live-action adaptations to come to the United States for a limited time with heavy promotion on anime sites to make you aware of its existence. And I had to admit, I was really curious when I heard about this movie because the very idea of transferring Gintama’s humor to live-action sounded to me like something that would work really well. For all the qualities that Gintama fans praise about the show, the animation is definitely not one of them given how it has that long-running series problem of being as visually stimulating as dead fish in order to consistently produce it. At least with live-action actors, you’d have more freedom of movement to execute jokes properly, and more importantly, we wouldn’t have any of those stupid exaggerated faces that were about as funny as a clown squirting acid into your eyes.

However, I vastly underestimated how well the transfer would turn out, because not only is the live-action Gintama quite good, it’s actually one of my new all-time favorite comedy films. And no one is more surprised about that than me.

Gintama (2017) is an adaptation of the series’ first major arc, which is apparently a pretty popular one to look back on given how Sunrise actually adapted it once for the small screen and once for the big screen. The film starts off with a live-action recreation of the very first scene in the manga when Shinpachi first met Gintoki at a restaurant, only for the characters to break the fourth-wall, flat-out admit that they’re going to skip Kagura’s introduction and not bother too much with trying to draw in an audience who’s never interacted with the series, and then begin the movie proper on that beetle-hunting chapter when the Odd Jobs crew compete with the Shinsengumi in order to see who can capture the golden rhinoceros first. This entire segment is basically dedicated to reminding us of who the characters are as well as what actors portray them, before having Katsura get attacked by a mysterious serial killer and thus starting the story proper. If you don’t know who any of these characters I’m talking about are, don’t worry because the movie will get you up to speed on Okita’s cannon-happy habits very quickly.

Most Gintama veterans know this tale. The one behind these mysterious attacks is an old comrade of Gintoki’s that fought alongside him during the war against the aliens, and thus Gintoki must take him on with the help of his friends and plenty of fourth-wall breaking jokes that tend to disappear when shit hits the fan. Also, because this is a Shonen Jump series, that means colorful characters on both sides of the conflict and a few one-on-one fights, although don’t expect anything on the level of a Donnie Yen film here. It’s a pretty formulaic plot when you get down to it, even when compared to other Shonen Jump series like Rurouni Kenshin. But Gintama’s serious side was never its strong point anyways, and anybody who says otherwise is wrong.

The best way to go into this new Gintama is by treating it as the fifteen movie adaptation of the Benizakura Arc, except this time it’s live-action for some reason. While the plot is mostly the same, boy do the jokes exploit this new medium for all it’s worth. Lots of jabs are made towards the characters not looking quite right outside of animation, especially Elizabeth where it’s outright impossible to deny that she’s someone wearing a suit. And a bunch of the parodies were reworked so that they’d work better in live-action. For example, Char from Gundam makes an appearance, and without spoiling anything, let’s just say that the jokes centering around him wouldn’t be nearly as funny if he was drawn in the same style as all the other Gintama characters.

I obviously didn’t care for the plot itself, but as a core to support all the jokes and flashy action, it does its job alright. Sure there’s one actual death that kind of sticks out like a sore thumb, but that’s all quickly forgotten so that we can have one final showdown before escaping enemy territory in the most absurd way possible. As such, the only real way to appreciate this new Gintama is by whether or not it made me laugh. And I did quite a lot. I watched this movie twice and I was laughing harder than the actual Gintama fans on my second run for the most part.

And it’s not like I magically grew a taste for Gintama’s brand of humor out of nowhere. To prove that, I recently watched that Final Chapter film that came out in 2013 where Gintoki got transported two years into the future and I didn’t like it very much. The animation was so cheap that it kept messing up the timing, the parodies look lame when they’re all animated in the same style as the show, and whenever a funny joke did occur, that movie would refuse to end it until five minutes after it hits its peak. Gintama in live-action has the benefit of constantly moving actors and a director who knows that the One Piece skit shouldn’t go on for longer than thirty seconds. Granted, Sadaharu looks very out of place since he’s the only CG character in the film and it’s cheaper-than-usual CG as well, but otherwise everything in this movie just felt so alive. 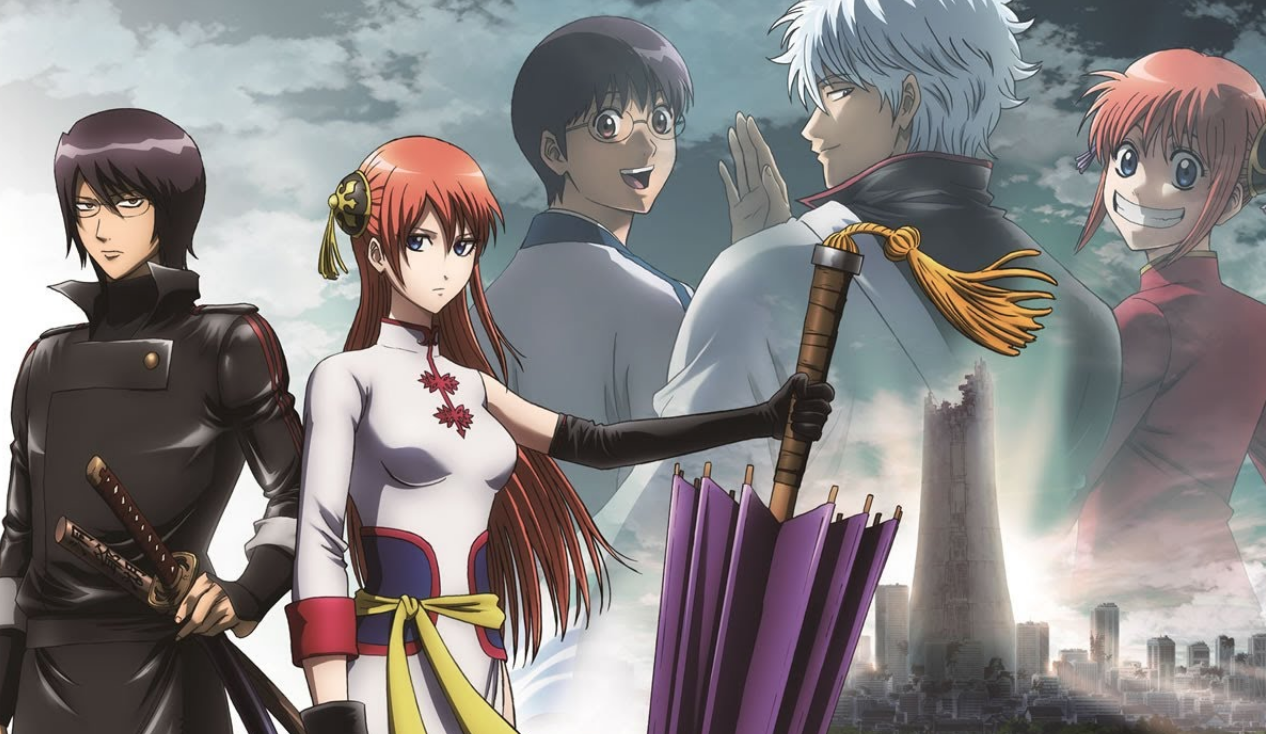 Getting pictures of the live Gintama is a pain, so have one from the other movie I just mentioned and nothing else.

I’ve seen a lot of fans complain that the anime voice actors couldn’t dub over the real-life actors’ voices, but 1) I don’t care enough about seiyuu to complain that Youhei Sunohara’s voice isn’t coming out of Shinpachi 2) the acting is fine for the most part and really funny when it just goes off the wall. Special mention goes to Jiro Sato, the guy who plays that Henpeita dude with the weird eyes in the original manga, but in this adaptation, he has normal eyes and one of the most hilarious stutters I’ve ever seen in my life. I don’t care if he doesn’t look like the original design. He’s a far funnier strategist with a lolita complex when he’s basically insulting people for long stretches with that smug smile.

Speaking of how the characters look, most of them actually look like their animated counterparts and it’s really surprising how they got an actor to perfectly resemble what I’d expect Shinpachi to look like if he was a real person. Not all of the casting is great though. Kagura looks more like a random woman doing Kagura cosplay, and Kondo looks a lot older than he should, especially compared to the other Shinsengumi who are supposed to be around the same age as him. Nevertheless, they all fit their parts pretty well, and since Gintama is so off-the-walls as a property to begin with, they’d probably make jokes about how unfitting some of characters look in the sequel if we were unsatisfied.

Aside from those points, there aren’t really many criticisms I can give to the Gintama movie besides how not all the jokes land, but there’s so many that there’s bound to be some duds. I thought it was really funny and from what I’ve gathered, the film was faithful to the source material so old fans who aren’t allergic to live-action shouldn’t have any complaints either. Of course, having not seen that arc and assuming this was a movie-only plot until I did some research, I didn’t find anything too distinct about it that I couldn’t say about Gintama as a whole. Just know that while you might need some basic knowledge of the series, you don’t have to actually read the manga or watch the anime to get into this. I didn’t, and I had a blast.

There’s a sequel film announced to come out this year in Japan, and I’m honestly looking forward to it. If this team keeps up this quality for the next installment and maybe several more after that, then I will actually have a Gintama series amongst my personal favorites, and that’s something I never thought I’d say. But then again, while there are some inherently flawed concepts out there like pretty much every harem story ever, a lot of bad things can turn out good just like how a lot of good things can turn out bad depending on how it’s realized, so I shouldn’t be too surprised. Just look at the live-action Speed Racer and how it was a million times better than that frankly dated cartoon (and no, that movie wasn’t awful. Shut up).

But yeah, I haven’t laughed that hard at a movie since The Nice Guys. And I really liked/laughed at The Disaster Artist and I, Tonya, so that should give a good clarification regarding how well put together I think this movie is. Granted, I think Jiro Sato was the main reason I laughed as hard as I did and I doubt he’ll be returning much in later films, but what do I know about Gintama lore? Either way, this is my anime of the year right here. Fuck Devilman Crybaby and Violet Evergarden and Steins;Gate 0 and Made in Abyss S2. It’s all about Shun Oguri having fun, baby!