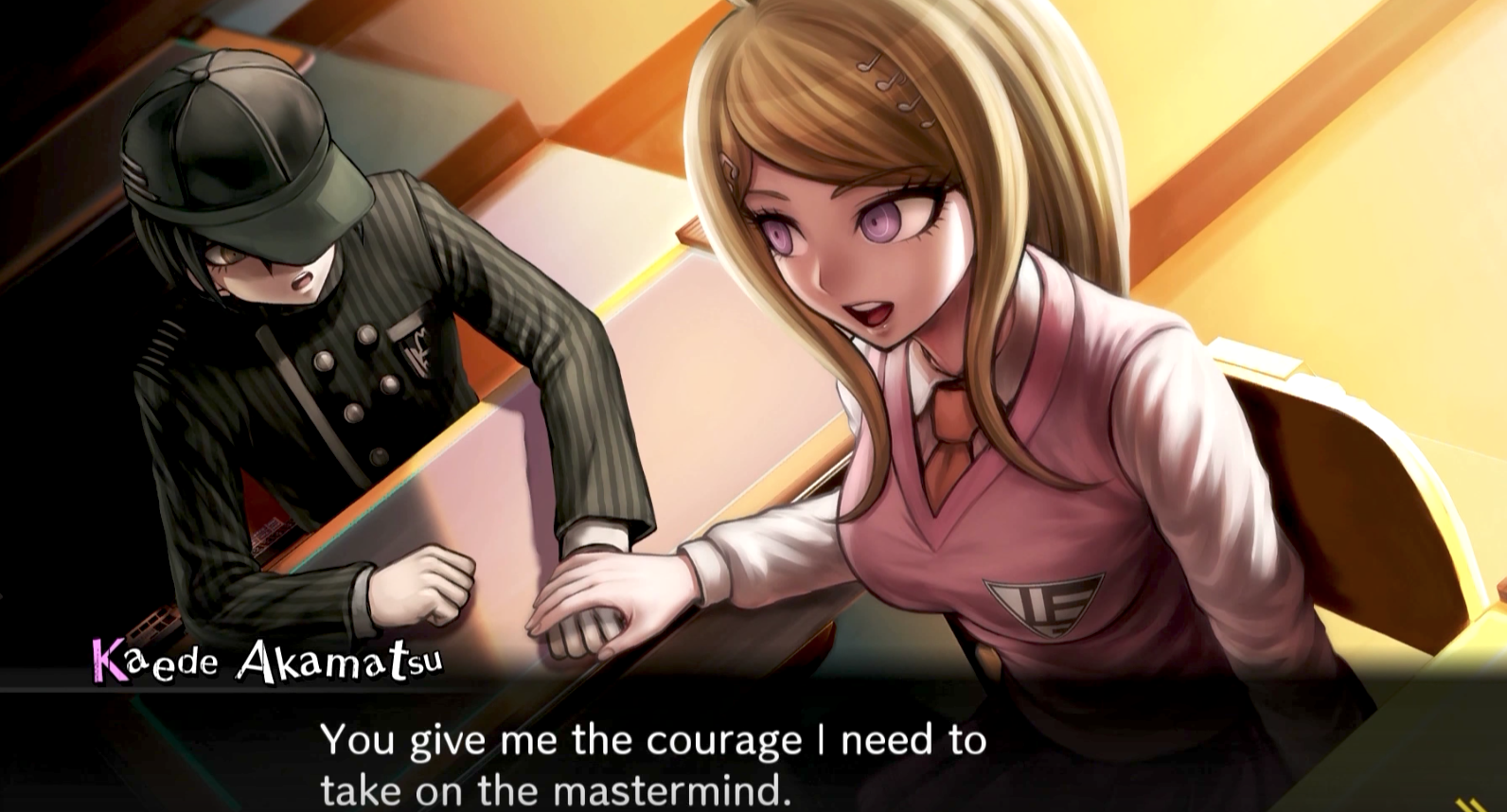 Well that was heartbreaking.

I’ve noticed a few characteristics that always seem to accompany the first chapters of Danganronpa games. The victim is always an unfortunate consequence of some scheme gone horribly wrong. The perpetrator is somewhat sympathetic because it was just bad luck that he ended up killing someone he didn’t intend to. And there’s always someone who quickly befriends the protagonist, only for things to go sour when it turns out said friend is either crazy or dead. Well in Sayaka’s case from the first game, it was a bit of both.

Danganronpa V3 sticks to these characteristics for its first chapter whilst throwing in enough twists to the formula so that it at least feels fresh. And really, the fact that this game can still surprise me even when it’s bound to a few set rules speaks volumes regarding how much I enjoy the writing in this series. I knew going into this installment that it wasn’t reinventing the formula, and unlike most of the fandom before the 2016 TV series changed their cognition of it, I didn’t think Danganronpa 2’s additions to the first game’s formula were an improvement apart from not making the culprit super obvious. But while the way that V3 executed its initial case didn’t catch me off guard too much since I’m used to Kodaka being a huge troll, it definitely left me emotional to the point that I intentionally sabotaged myself during the trial a few times. I’m not going to spoil what happened, and I’ve been informed that the big twist in Chapter 1 is common knowledge amongst the fandom, so either you know it or you haven’t played the game yet and I shouldn’t deprive you of that. 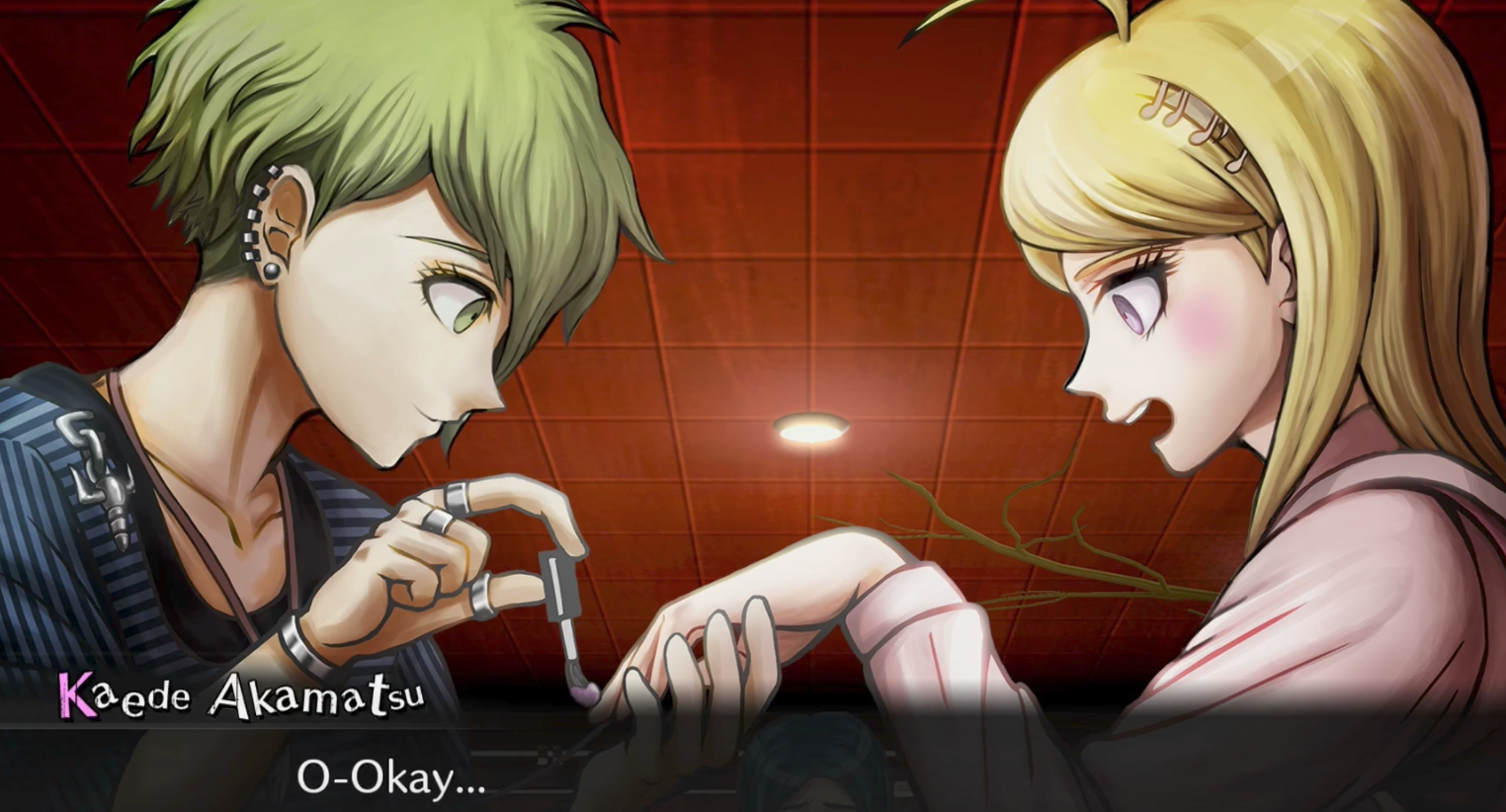 I will run down the basics though. Chapter 1 starts with the characters being introduced to the rules of the killing game, and I noticed a few peculiar changes compared to Danganronpa 1 and 2. First off, there’s no limit to how many people you can kill. Second, the game supposedly ends when only two people are left alive. I’m not really sure what the purpose of those new rules are, but I’m betting they’re going to be very important around the last few chapters when the main group is left with five people or something.

After the rules are laid out, it’s revealed that there’s actually a tunnel in the sewers that you can go through in order to exit the killing game. Problem is, said journey takes the form of a minigame that’s designed like one of those romhack troll games in the vein of Cat Mario and such, so good luck beating that unless you’re a professional speed runner or a Korean. I’ve been informed after going through what I initially assumed were the mandatory losses that not only is it possible to clear that game, but doing so gives a bit of a spoiler to future events, so it’s probably for the best that I don’t even attempt to clear it at the moment. Not that I ever plan to. I know you get a trophy and such for doing so, but I’m spending a lot of my free time just completing the game normally as is. 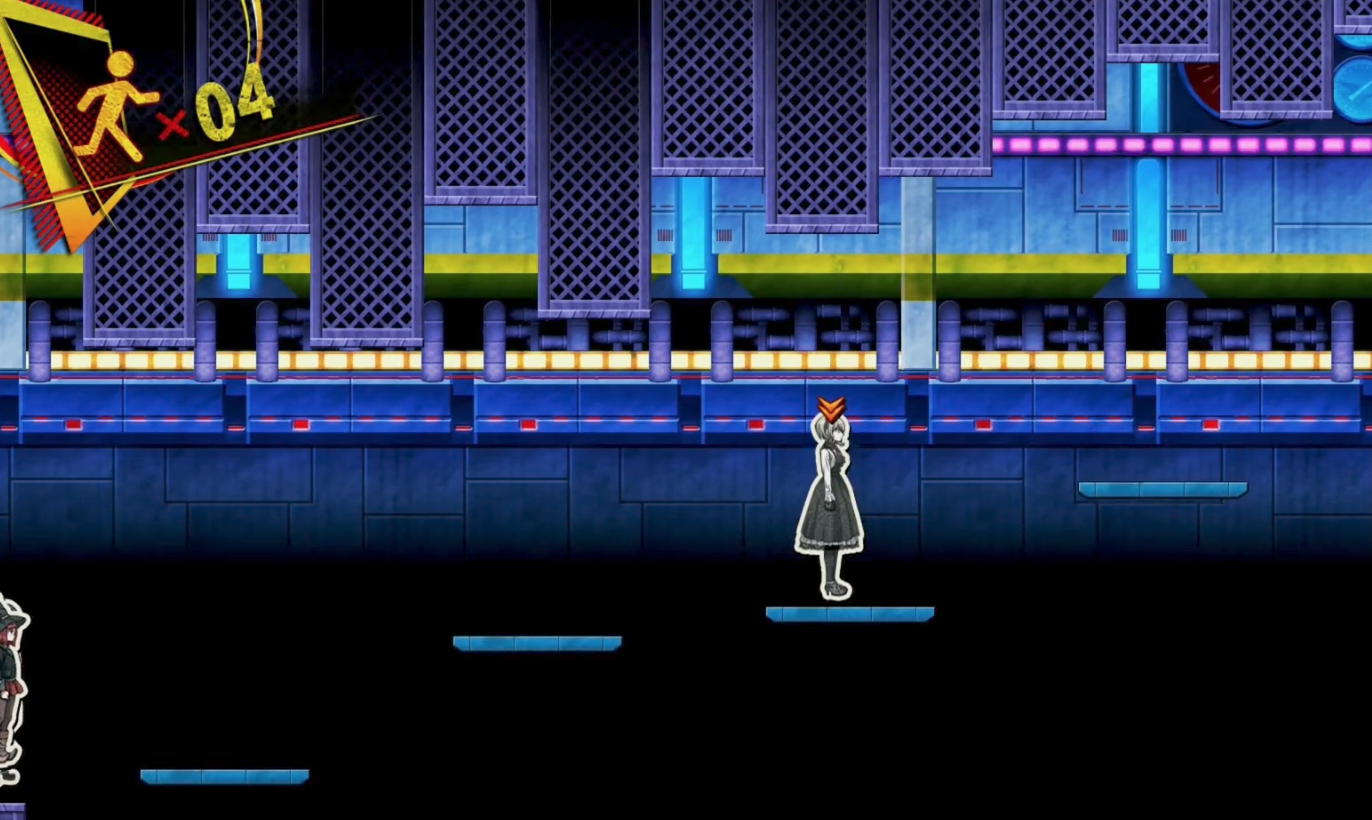 Following that act, we go through the obvious setup for the first murder coupled with free-time events, where I abused the game’s save system and chapter selection feature in order to hang out with all the characters and get their friendship fragments. However, I also discovered that you can’t progress past the second level in terms of friendship ranks in the first chapter, and I had to look up that you need access to Kaede’s Ultimate Lab before you can get to Rank 2 with Angie. I assumed this was because the later rank up events took future plot points into account like how you couldn’t establish a friendship with Fuyuhiko Kuzuryu in the second game until Chapter 3, and while I was sort of correct, I was way off in regards to the exact reasoning why. It also hit me hard when I realized that equipping skills for the trials is more expensive in this game compared to the previous iterations, so even if I used my higher-than-average number of fragments to purchase broken abilities, I wouldn’t be able to equip them.

As for the setup, if I had one major complaint for this chapter, it would be that the lead-up to the first murder could have been more exciting and less “this is going to go horribly wrong”. Monokuma basically tempts the main cast by saying that the first murder is an automatic win for the culprit, and if a murder doesn’t happen within two days, said cast will be killed by an army of Monokumas. This forces Kaede and Shuichi to come up with a plan to catch the mastermind that was obviously not going to go well and requires me to sit through quite a lot of cutscenes in order to get to the end result. While it’s easier in a video game than in anime, I’m really not a big fan of that sort of obvious setup when left to its own devices, and there’s only so much the black humor can do to liven things up when said setup goes on for the length of any of The Godfather movies. To the game’s credit though, I was paying too much attention on how “serviceable” the setup was that I didn’t see the first victim coming despite it being obvious in retrospect, nor the many hints regarding the culprit’s true identity. 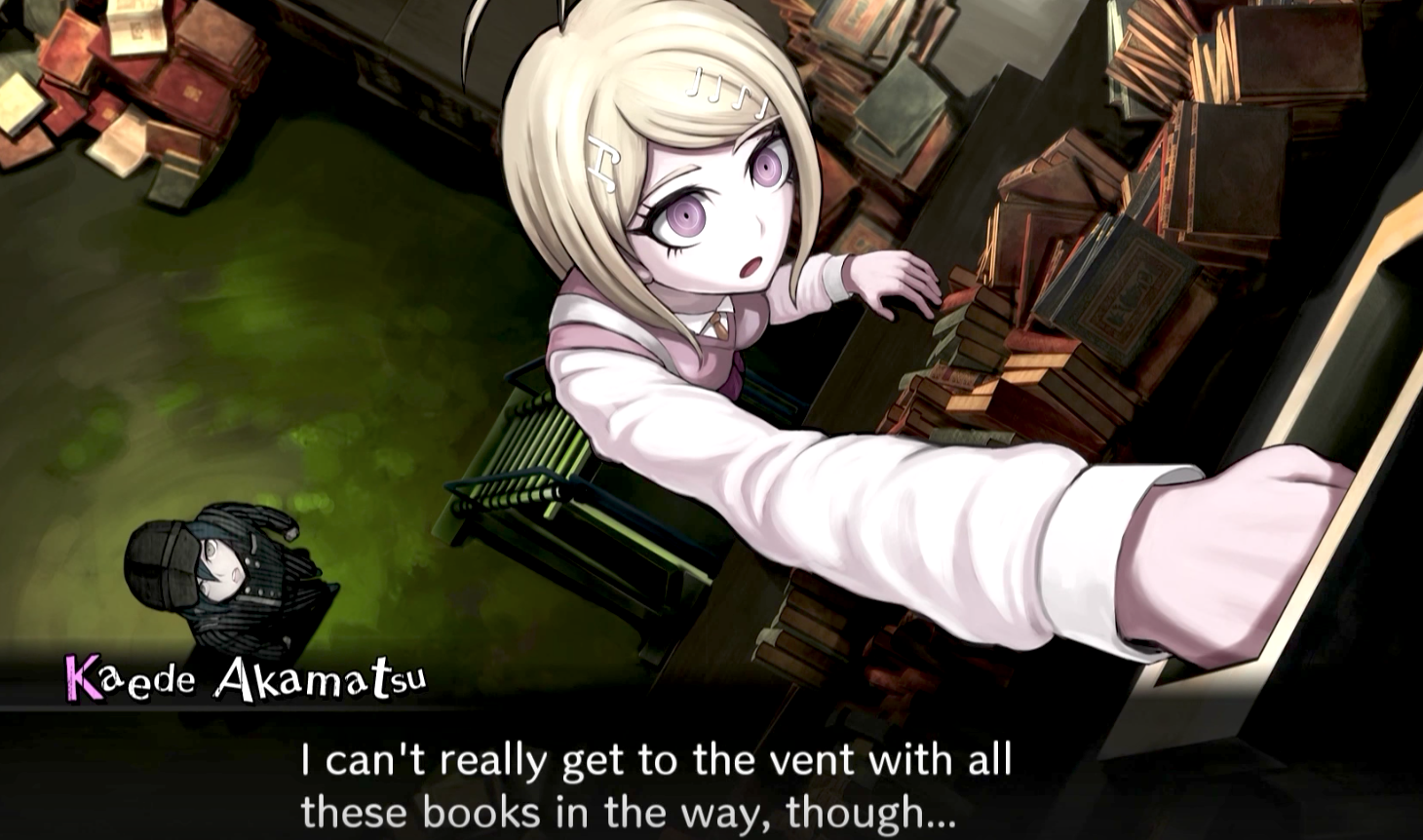 Also in the game’s defense, I suffered from major brain farts whilst playing Danganronpa V3 in general, because I got alot of answers wrong during the trial section that other gamers seemed to get through just fine. Granted I was playing on the mean difficulty, but I completely forgot how someone mentioned you could roll up the projector screen to form a long rod and such until it became a solution to one of the puzzles. I even ended up save scumming throughout the course of the trial just so I could get my undeserved “A” rank after the fact. Personally, I do think the leaps in logic you have to go through to uncover the truth are higher than before, but that’s no excuse for overlooking how one set of pictures doesn’t look right compared to the others. I mean I played through all the Ace Attorney games. Granted those games don’t have time limits, but still.

I eventually pushed through though and discovered the truth of the case, which as I said near the beginning was a huge gut-puncher because it involved a character I really liked and the reasoning behind it all was something I found both tragic and sympathetic. Now some people have complained that the first case was a bit unfair because the game purposefully withheld information from you in order for the mystery to work. Like the controversial reveal in Zero Time Dilemma though, I think it was a great twist that was heavily foreshadowed enough to be acceptable, whilst fitting in greatly with V3’s story about “truth and lies” – plus I figured it out when a certain character hesitated to speak because there was only one possible reason why he’d do that. If I had to summarize it broadly, Chapter 1 was basically challenging the very notion of POV characters in video games and how much they really let the player interact with them, and I think it was executed pretty well. More importantly, I just love when video games challenge the very notion of the interactive medium itself, especially when coupled with Japanese quirkiness. It’s part of the reason why Metal Gear Solid is one of my favorite video game franchises of all-time despite its dated gameplay and long-ass cutscenes. 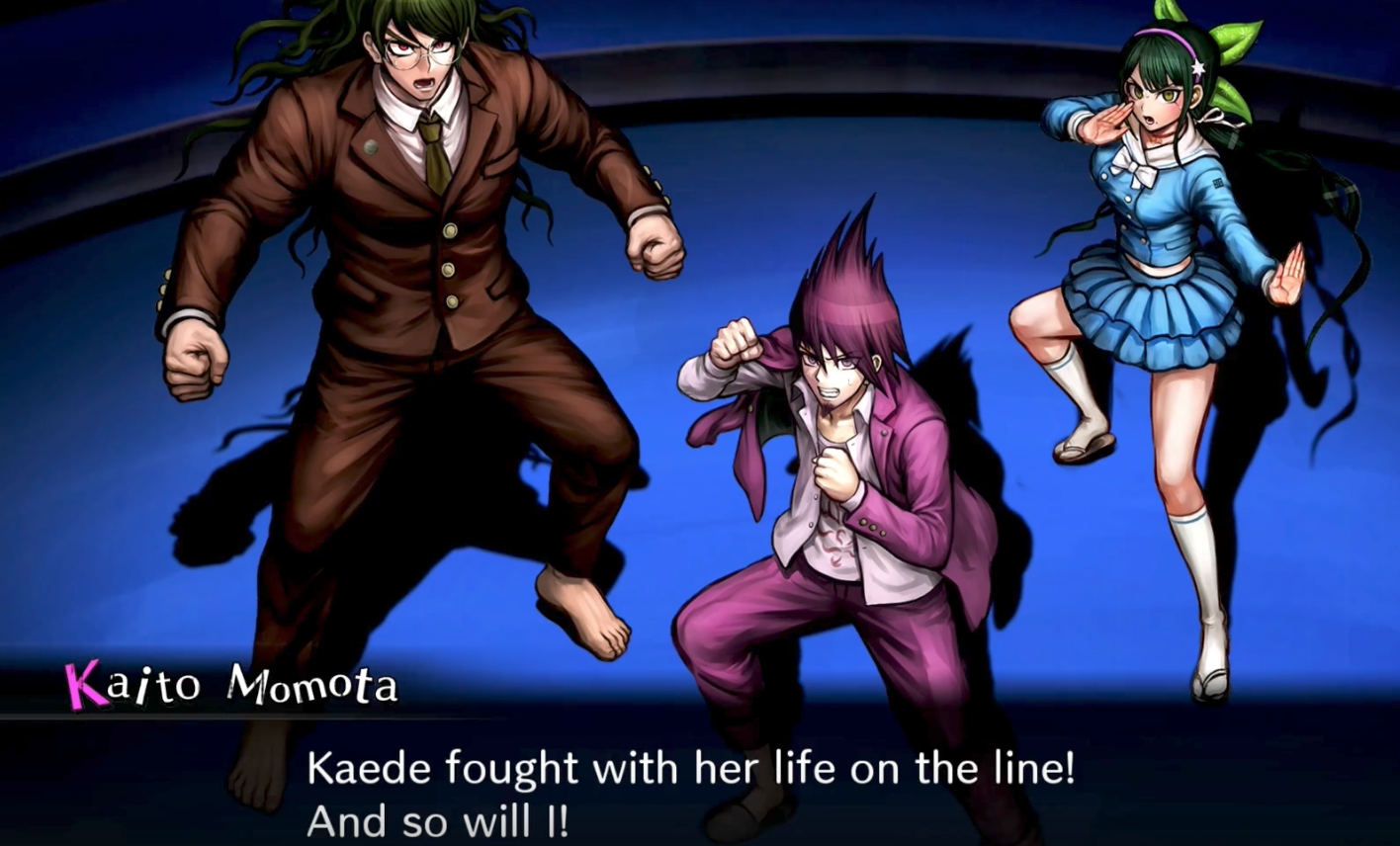 It may have depended a bit too much on the twist for my liking, but V3’s Chapter 1 became my favorite opening case to a Danganronpa game after I finished it. It struck the right balance for me between emotional, logical, and thematic, and the new gameplay segments like Mass Panic Debate and Scrum Debate are just fun. The only thing I’m not comfortable with is the lie bullet mechanic because it’s a little hard to tell what the “opposite” of a truth bullet actually is, and I get the feeling the game isn’t going to tell me when I need to lie in the future like they did here. I’m aware this mechanic replaces that old one when you have to absorb someone else’s statement in order to use it against another one – which wasn’t the most intuitive mechanic either – but at least that one didn’t have “on the meat bone”-levels of subjectivity.

Still, I’ll deal with that when I’m required to lie in the future. For now, I’m definitely pumped for the next few chapters and have high hopes that they can surprise me just like this one did.